Last week I shared with you my expanded frame wall but I didn’t get into much detail. 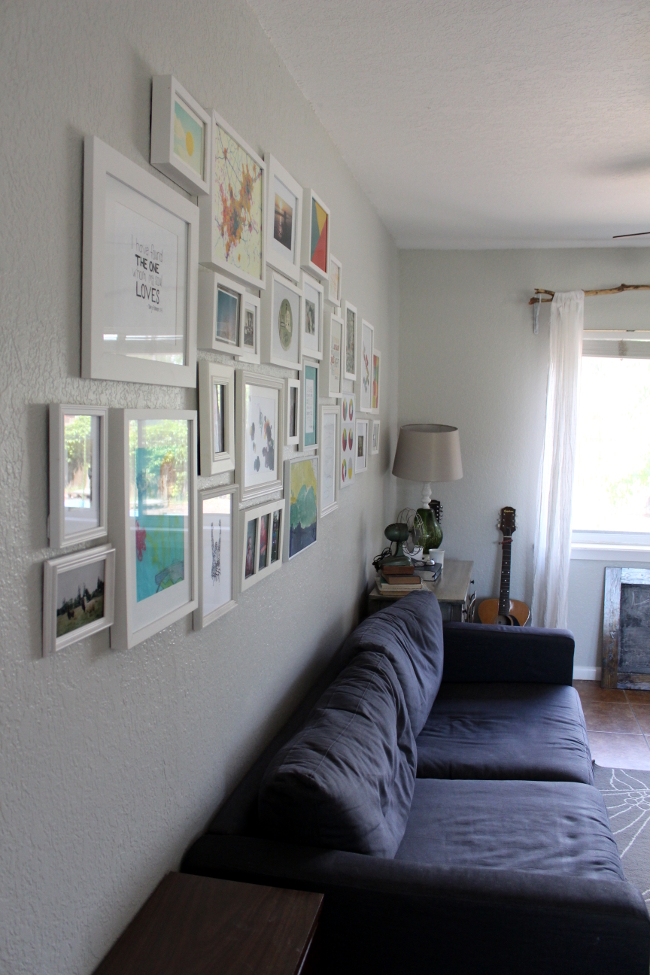 Today I’m back to spill the beans on where each picture and frame is from. So let’s get to it, shall we?

1. Yellow balloon print from Society 6, because who doesn’t like balloons?

2. This pretty map of the DC/Baltimore area was originally sold by 20×200. Since they are taking a hiatus, you could go here to view any given area and take a screenshot to print.

3. This is a picture of Elijah back in 2011. I printed it at home so his face came out darker than the actual picture, making it more of a silhouette.

4. A geometric bird drawing on Etsy.

5. I wrote this paraphrase of Song of Solomon 3:4 over a year ago to hang in our bedroom, which it did for a while until I moved it to the living room.

6. I took this in high school using a camera that uses 110 film (like this). I can’t find that size film anymore, but it was fun using it while it lasted.

7. An old photo of my dad and late aunt, and two other folks I don’t know.

9. Another picture taken with 110 film of me in Colorado feeding horses. I was, no doubt, in a state of bliss. Oh, to be on a farm again. 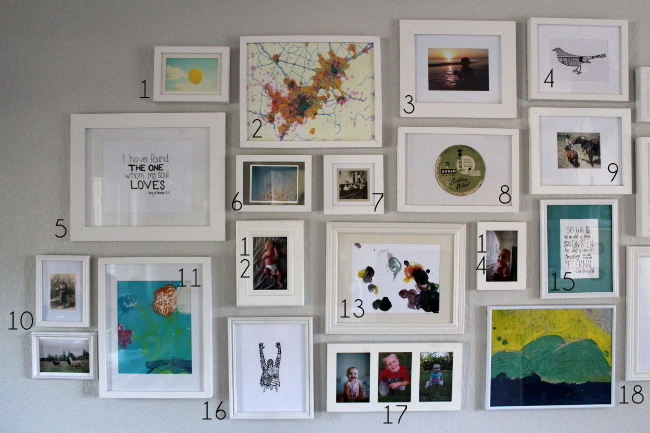 10. My beautiful grandma holding a puppy (you can see a close up here) and my mother’s four legged next door neighbors in Oregon. I spent a solid afternoon chasing those four llamas around. I somehow managed to leave without getting spit on.

14. Eliana must have been 8 months in this picture. At first glance, it looks like a recent picture of Isabelle.

16. Philip’s doodle drawing which you can find on Etsy. 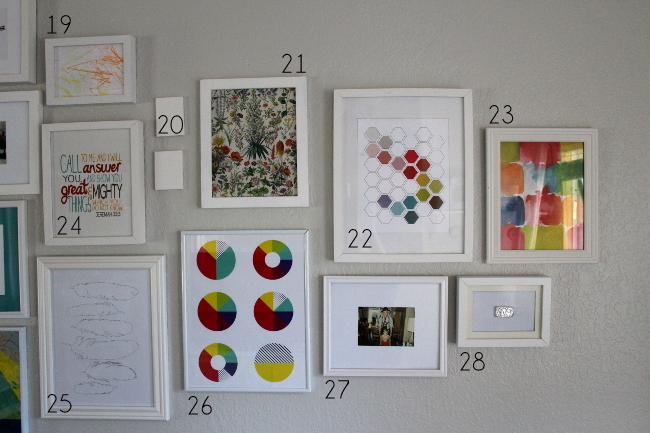 19. One of Eliana’s first drawings.

20. Little canvases I bought at Joann’s as wall filler… I still haven’t decided what to do with them yet.

21. A rip out from a Hobby Farm magazine.

22. A free printable from Ginger & George.

24. A bible verse wallpaper found on Flickr that I printed out. There’s are plenty to choose from!

25. I used a download of these printable feathers from Dabbles and Babbles to create this “art” on Gimp. One day it’d be nice to paint the feathers to add some color.

26. These were a pie chart gift tags printable from Eat, Drink, Chic. Again, I used Gimp to align them in this position.

27. The only childhood picture I have of Philip, with his grandpa.

28. A folded up piece of aluminum foil. Weird? Maybe. While dating, Philip and I would sneak this into each others cars, homes, or pockets instead of just throwing it away. I found it tucked away into a box and had a good giggle that it was still around. Instead of just throwing it away, I decided to frame it. I still laugh about it from time to time.

Whew, that was a long list. From this, it’s easy to tell I am a fan of both my children’s art and free art found online. So many bloggers offer beautiful free printables that can add so much fun to a frame wall. The pictures in these frames are always changing, which I like. It keeps things new and exciting, instead of staring at the same pictures year after year. I even have a Pinterest board dedicated to art and printables.

I collected all of these frames over a year or two. Most of them are from Michael’s Arts and Crafts. I would wait until they were on sale and buy them with an additional coupon. I usually bought anywhere from two to five frames at a time. Unfortunately, Michael’s has discontinued my favorite brand of frames but they still sell some that are hanging on the wall. The others frames on the wall are either from thrift stores, Target, or Ikea. If you’re curious about a certain frame, just ask and I’ll do my best to point you in the right direction.