Word on the street is that terrazzo is making a come back and is being uncovered from years of hiding under berber carpeting. When we decided to purchase our home, I was excited to move on from our laminate floors to solid flooring but to be honest, I wasn’t super excited about the off-white, nearly yellow color of our terrazzo. Nearly two years and a heavy penny later, they have grown on me. So, let’s talk about refinishing our terrazzo.

My mom, having the good sense to get rid of her house full of carpet ten years ago, uncovered her terrazzo and hired a local company to refinish it. (Psst… my mom sold us that house.) They removed and patched the nail holes and spent days wet grinding and buffing about 1,000 square feet to a high sheen. Fast forward to now and that terrazzo belongs to us. The nail hole patches have discolored, and micro scratches throughout the surface of the floors turned the bright shine into a dull, dirty mess. The worst of all, there was ghosting from vinyl peel and stick tiles in the kitchen that seemed to have darken over time. 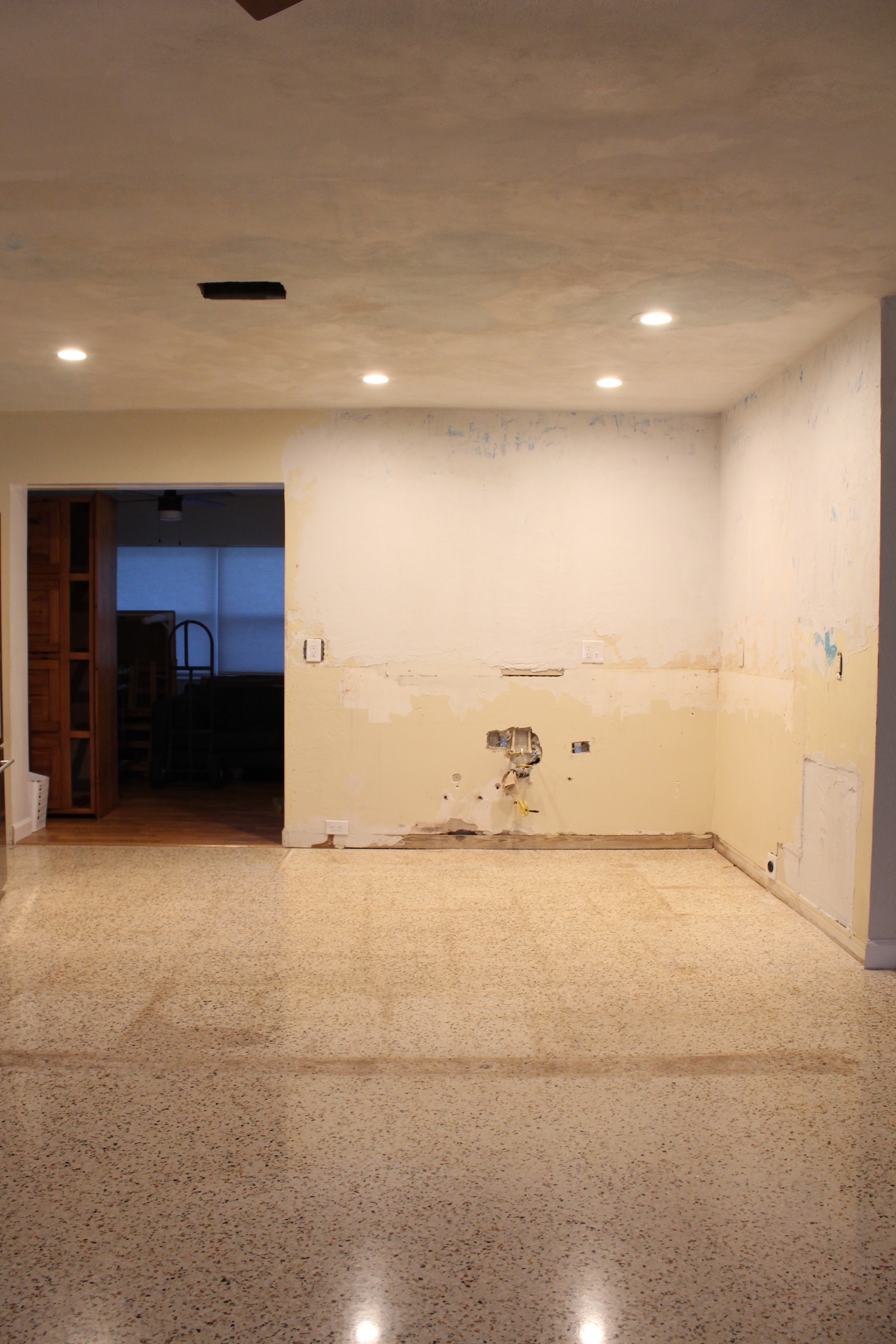 We weren’t initially planning on refinishing the terrazzo, although we always kept it in the back of our minds. I called the company my mom used to refinish the same terrazzo years ago and was quoted an insanely high price. I was also told that our terrazzo ought to be repolished every five years, which would be completely unrealistic. At the price we were quoted, we could have instead spent the money on hardwood floors that wouldn’t need refinishing for decades.

Because terrazzo is poured before any interior walls are built, we fully expected the terrazzo to run under the kitchen wall. Once we tore down that wall and saw how badly discolored it was, I called around to entertain refinishing the terrazzo once more. This time, I called a floor refinishing company and the owner came out the next business day. He assessed the situation and the scope of the job, gave us a quote our kitchen budget could handle, and expressed he would attempt every method to get rid of the stains. The end result was worth every penny – $700 to be exact. 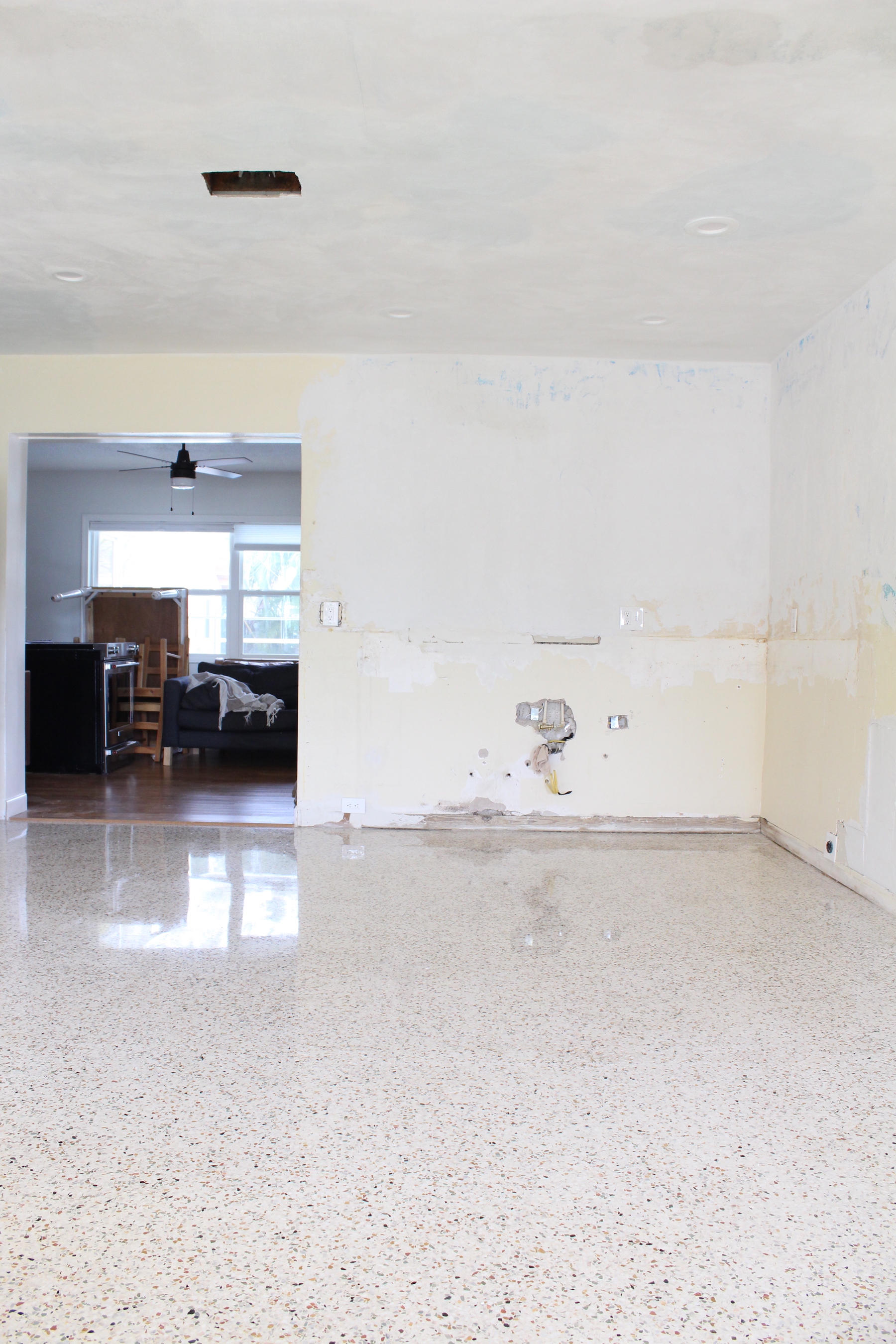 They came out to refinish the floors after we were finally finished with the bulk of the dusty work for the kitchen. After allowing the stains to soak overnight in paint and varnish remover for one night and a high concentrate of hydrogen peroxide for another few hours, they began the wet grinding refinishing process. Most of the old discolored patches were disintegrated during the stain removing process and were replaced. The final step was spraying a polishing agent and polishing with a steel wool buffer.

If you look closely in this next photo, you can spot several patches in the terrazzo. Next to them is a line of discoloration from the wall we removed that is barely noticeable. 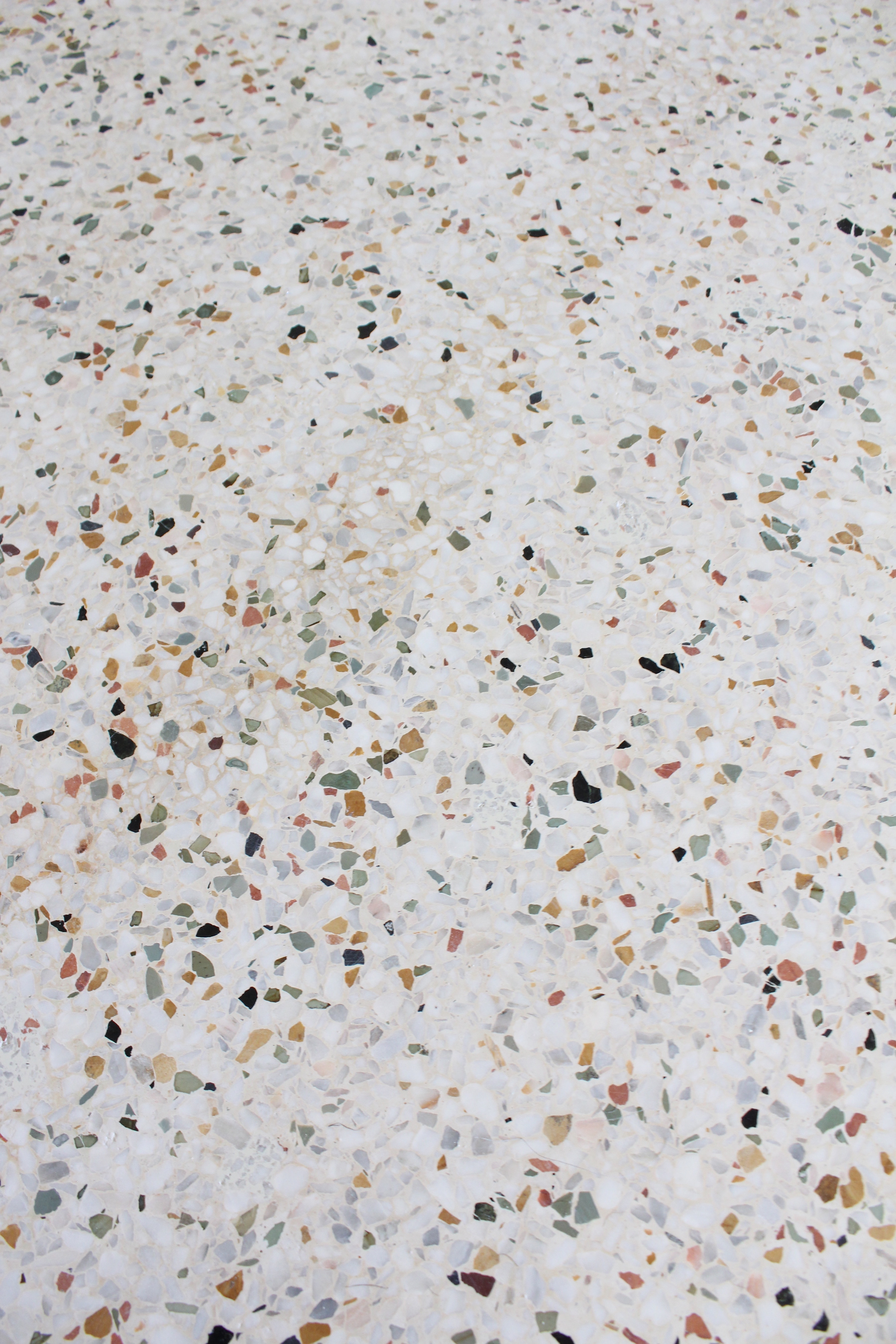 The main area of focus was the kitchen but they touched up the connected dining room and hallway as well. Because the newly refinished areas came out so bright and shiny, the bedrooms and bathroom, which once looked great, now look dull in comparison. We’re itching to repolish those rooms in the future. 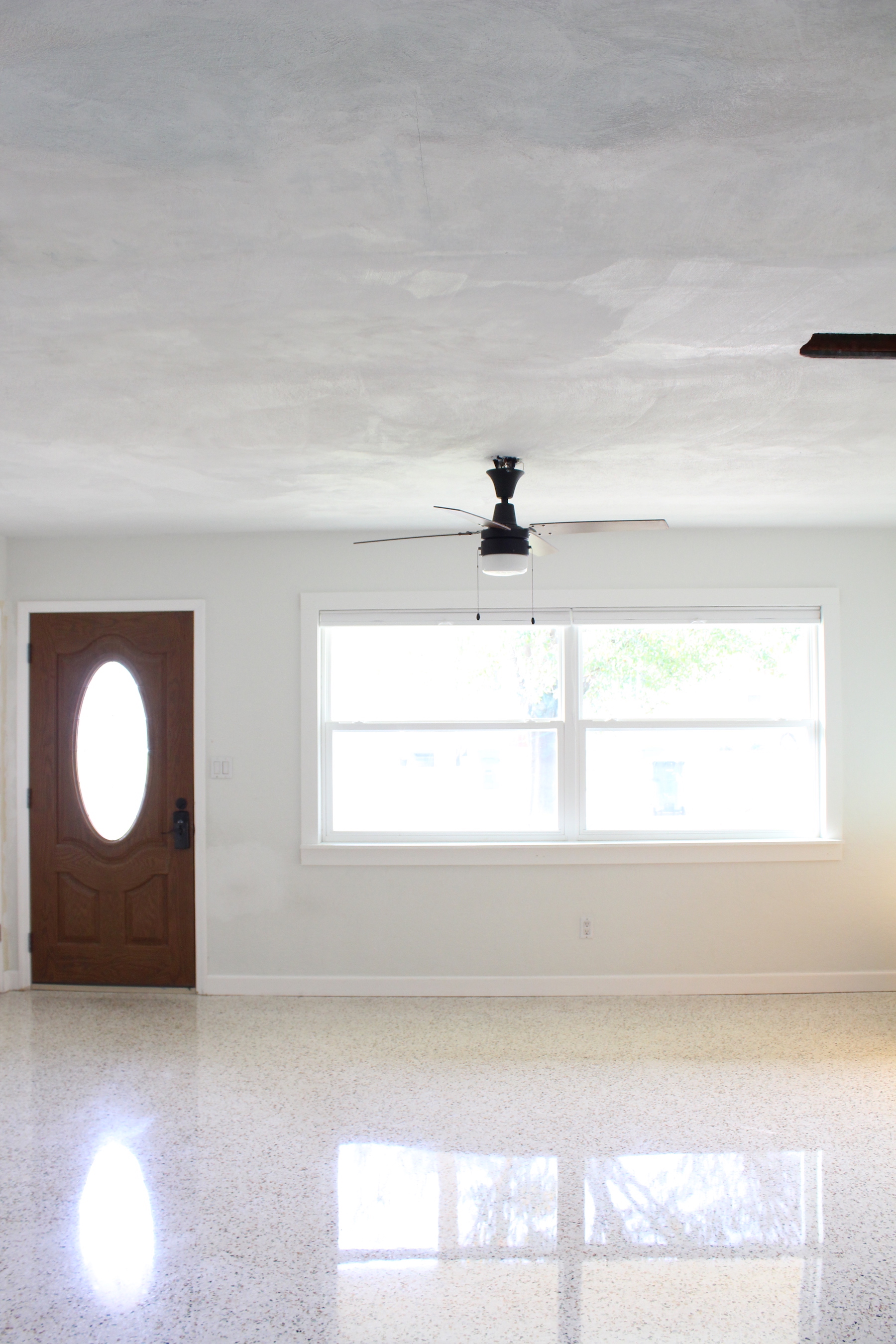 It honestly has been such a satisfying before and after to look at. The ghosting from the vinyl flooring is 98% gone and you can barely tell where the wall once stood. Their patches look amazing and blend cohesively with the original colors. There’s an old orange juice stain that I can still barely make out but that has been mostly covered by the kitchen island – you can check that out here. 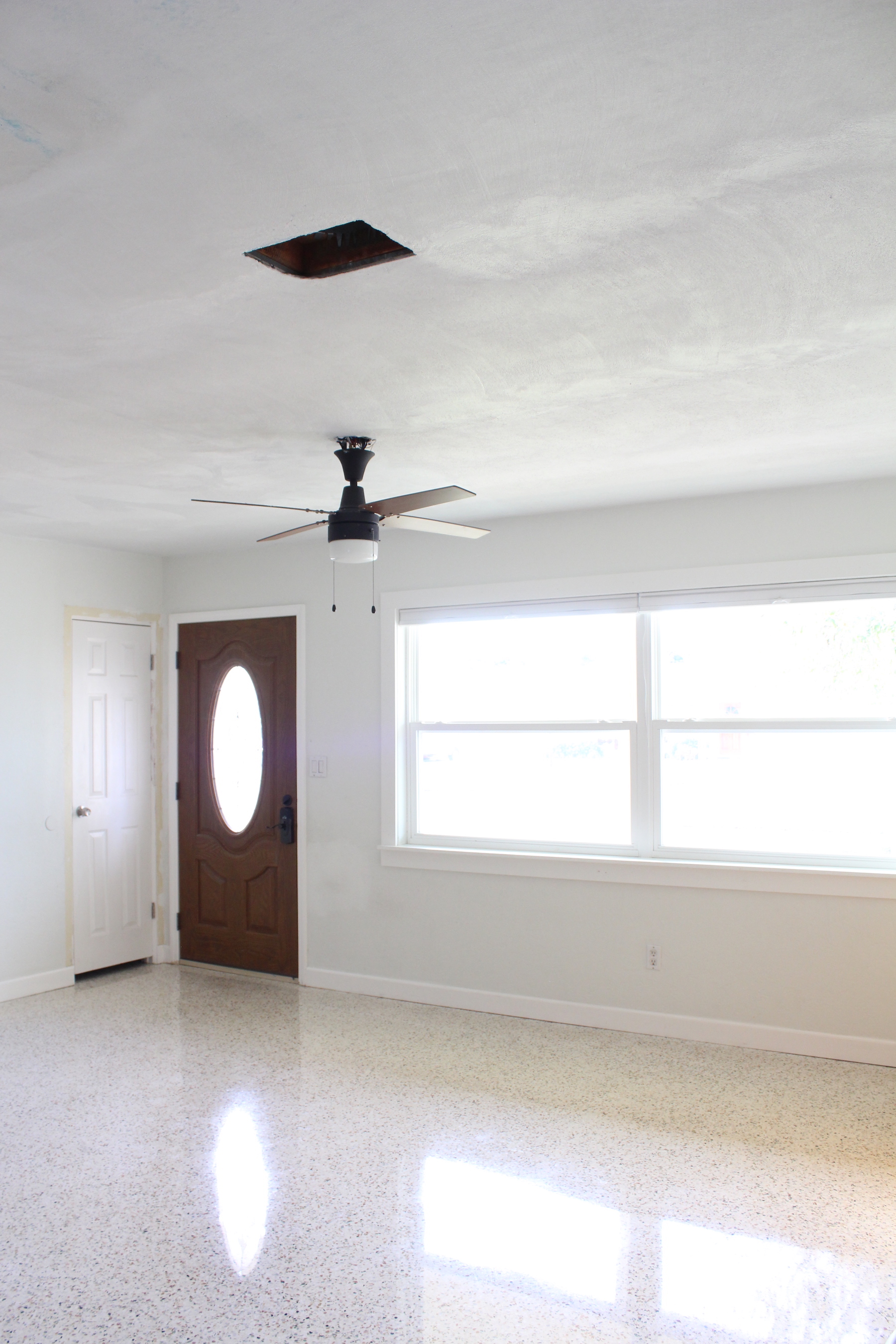 At the end of the whole process, the owner of the floor refinishing company walked me through the best practices for taking care of terrazzo floors: a thorough sweep with a soft bristled broom followed by a pass with a dust mop. He expressed the need to always clean up spills right away and to utilize household hydrogen peroxide soaked into a paper towel to remove stubborn spills (just let the paper towel sit on top of the stain overnight). So far, this method worked like a charm to remove a small tomato sauce stain. 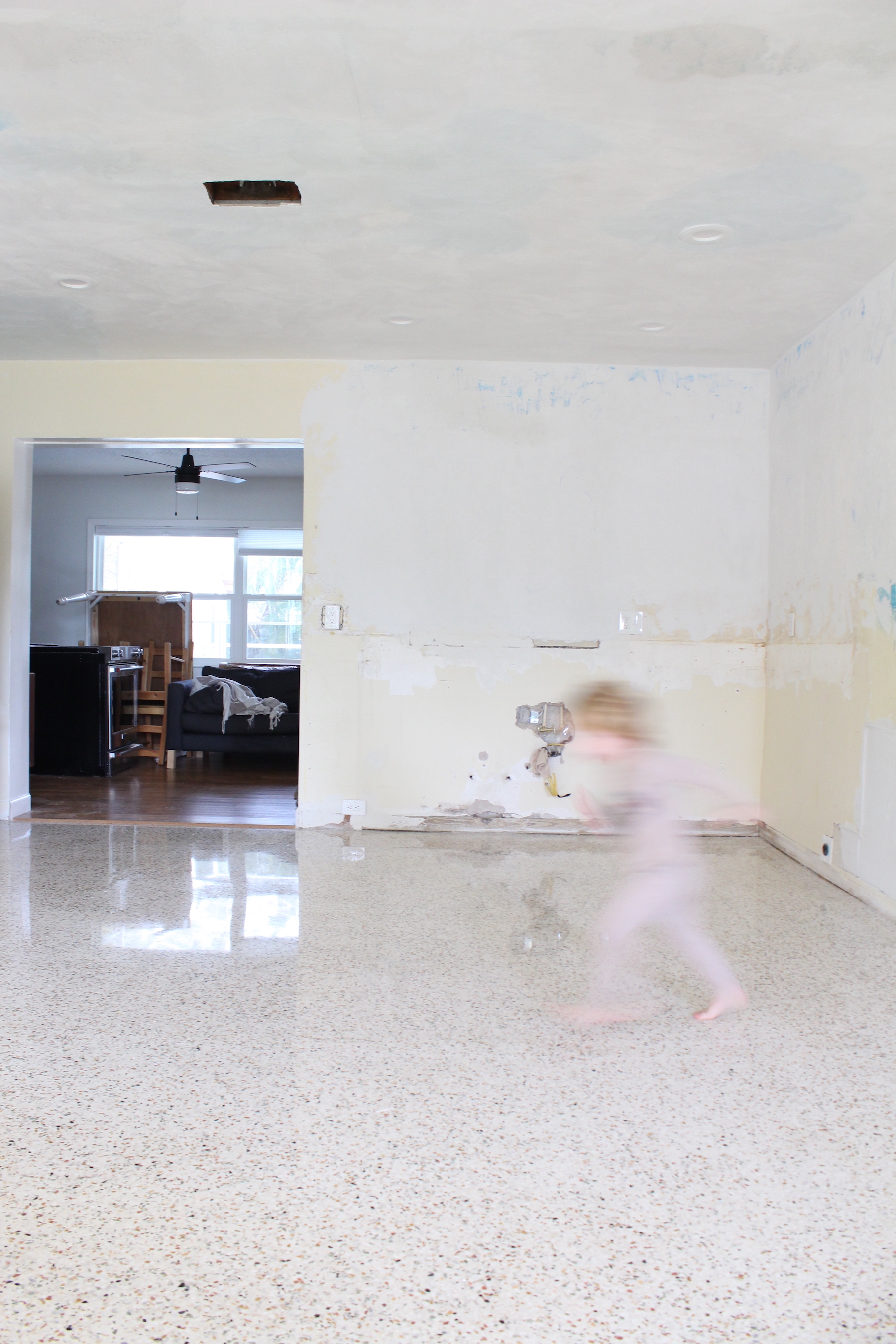 For those of you considering refinishing your terrazzo or choosing terrazzo for a new build, keep in mind that it is a solid surface, but isn’t as carefree as hardwood or tile, it can scratch relatively easily, and it does make things extra noisy (I’m convinced our neighbors can hear our children’s playful squeals from down the street). With that said, it is unique and beautiful, depending on the aggregates of course, and can take more of a beating than other floors (like laminate). Terrazzo is long lasting and can simply be refinished when years of use have dulled the shine.

What is your opinion on terrazzo? Do you love it or hate it? As trendy as terrazzo may be, the color of the aggregates and base concrete is what you’re stuck with. I’ve grown to like ours, but the off white concrete base wouldn’t have been my first choice, nor would have been the red aggregates. BUT, something about this terrazzo being original to the home and being solid makes it worth the extra thought when designing with it.

Comments (13)
Before and After kitchen remodeling renovation