We’ve been making headway with our kitchen remodel and are quickly approaching the chaos that is sure to come with a large remodel project. Our cabinets have been delivered, the sink and faucet are on the way, and I’m losing plenty of sleep while contemplating all of the lighting options. While I am attempting to orchestrate the various details, some huge improvements have been made in our kitchen. This is where the kitchen when we moved in, the official “before” photo. 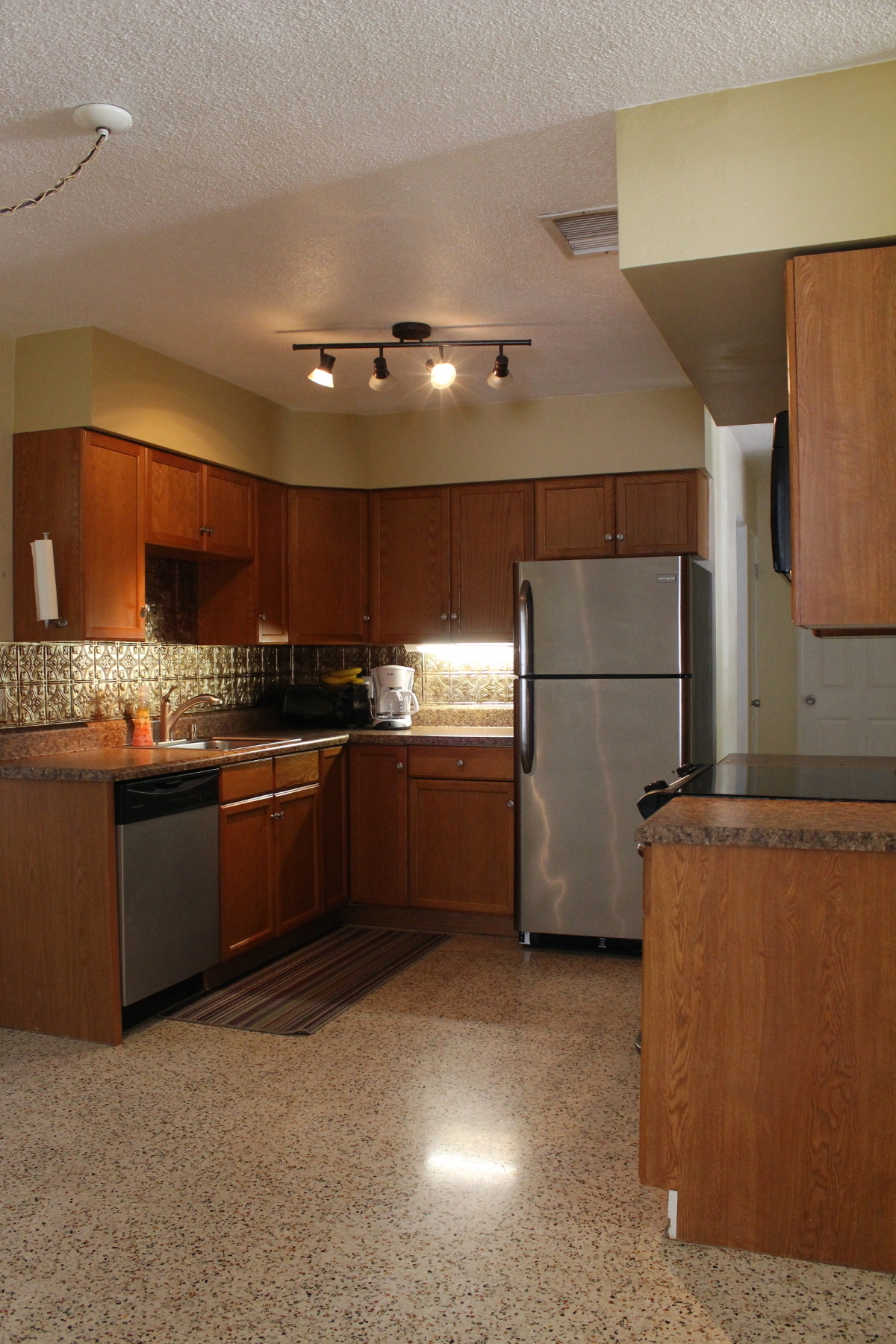 Shortly after closing, thinking that our kitchen remodel would happen in the near future, I lost all self control and removed the faux-copper backsplash. It didn’t improve the aesthetic of the kitchen but it did reveal and remove a pest haven – just, ew. We also moved the refrigerator to an adjacent wall, knowing that would be where it would ultimately stay. After discovering our slab leak, this is how the kitchen stayed for well over a year once the remodel was postponed. 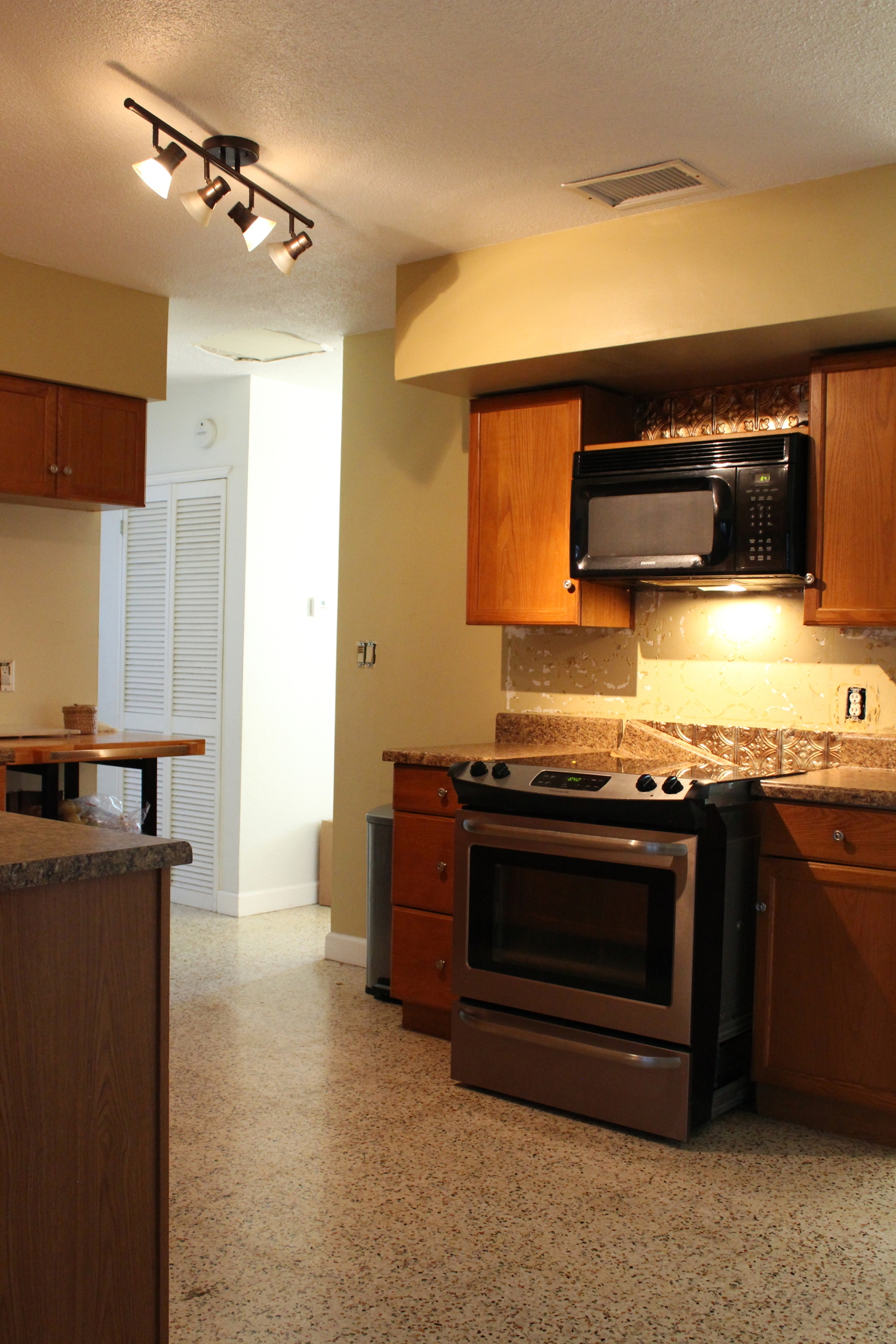 I affectionately called this room the household cave. It was dark and generally a difficult space to be in. Storage was lacking and there was barely any counter space. Did I mention it was dark? We knew we wanted to remodel the kitchen as soon as possible, but I remained doubtful until the actual wall-breaking day approached, since I didn’t want to get my hopes up. 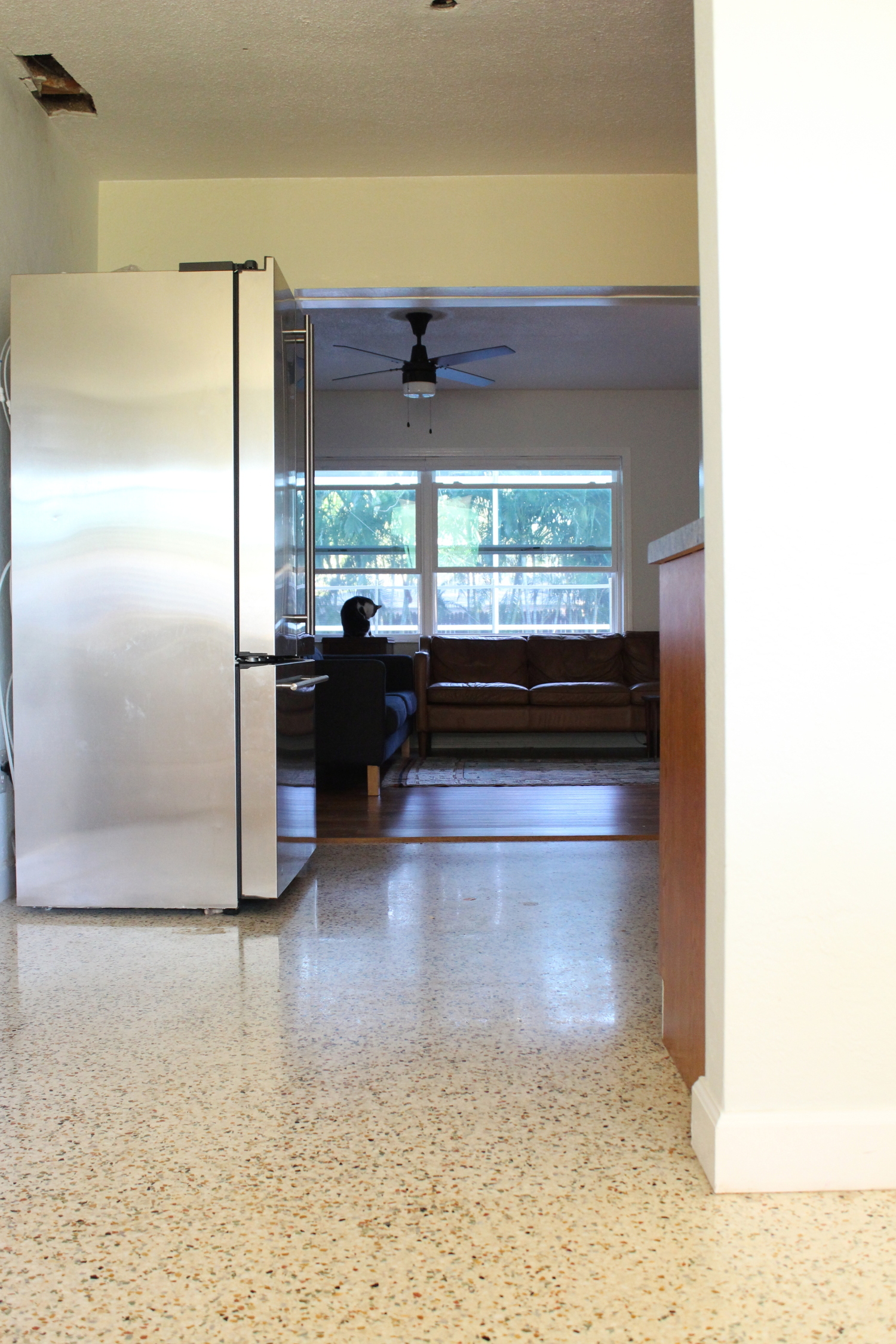 The first order of business that we were eager to check off our to-do list was knocking down the light-blocking (non-load bearing) wall. Removing the wall opens up the kitchen to the entry way/dining room and allows so much natural light to flood into the kitchen. After having an electrician move the wires for the oven and install new ceiling lights, we continued with demolition by removing the upper cabinets and soffits. 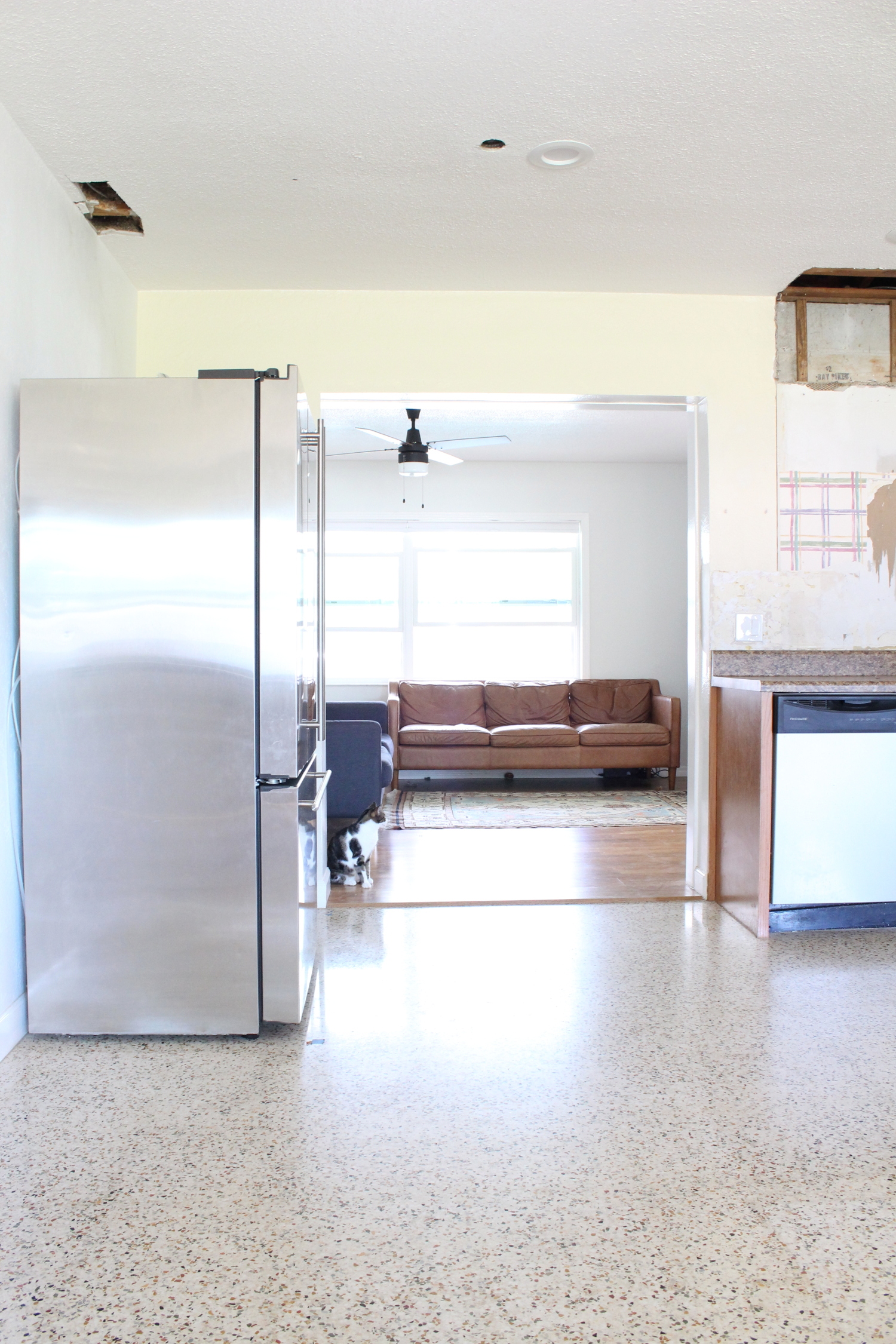 This is where we stand now. Storage is worse off than it was before, but only for a short time. We are in dire need of drywall and terrazzo repair, which we’ll get to after the plumbers and electricians reroute what was once in the old soffits. Meanwhile, I’ve been picking away at that old wallpaper and day dreaming of how the space will look once we are done. Before we can move forward and call the electricians out, there are some important final decisions I need to make, like whether I should put a pendant light or a sconce over the kitchen sink (still waffling on that one!) and where exactly to place the island pendants. 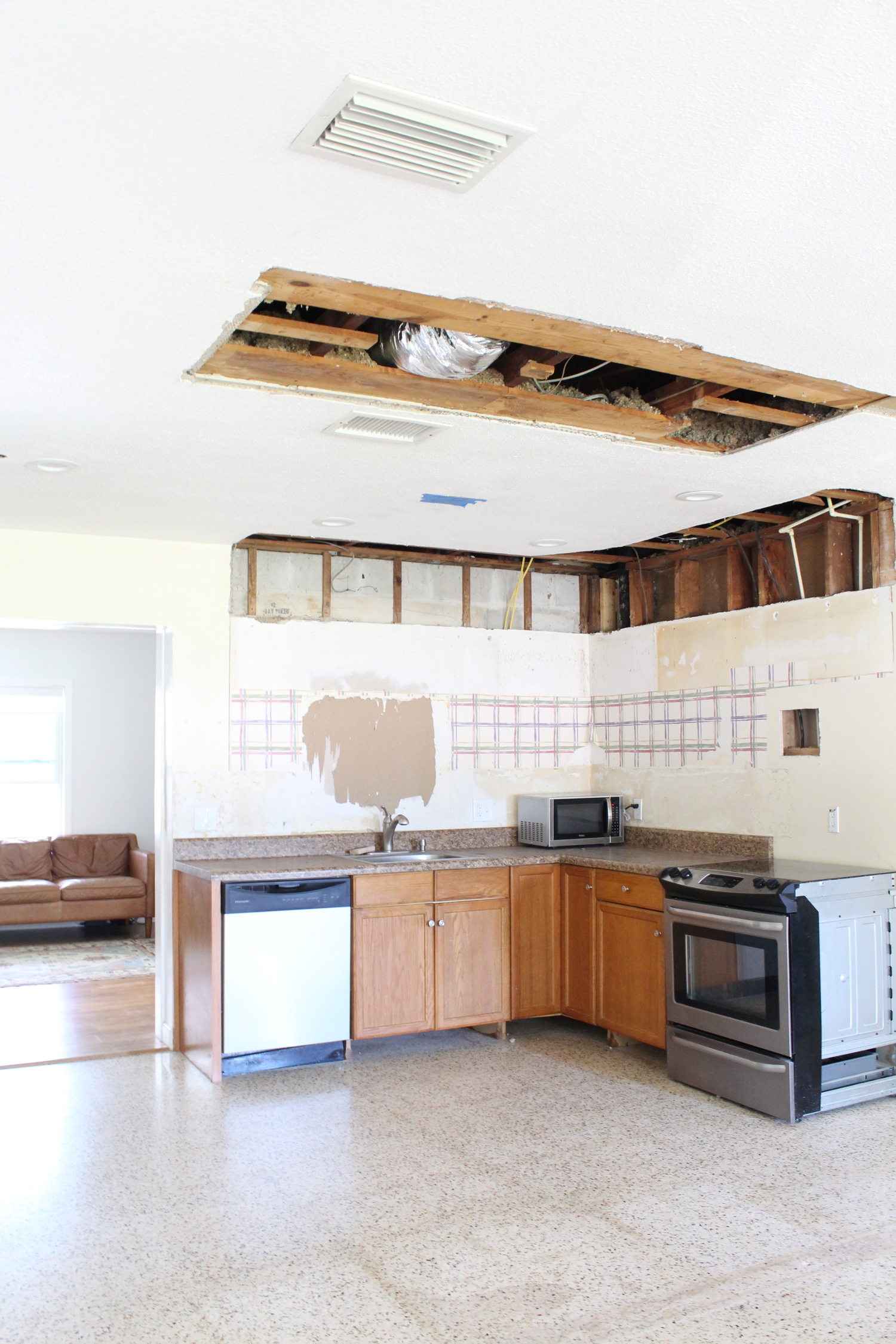 We were hoping to finish before Christmas but that deadline is inching closer without a huge amount of progress being made, so we’ll see how it works out. In the meantime we are enjoying our semi-demolished, naturally lit kitchen.