I’m a big fan of birth stories, so today I’m sharing the story of Dennis’s birth. If it’s not your thing, no worries, I’ll be back next week with the entryway reveal.

I woke up one morning in June, one week after we started building our backyard shed, feeling unusually nauseous and took a pregnancy test. Experiencing both nervousness and excitement, I cried when I finally braved to look at the results. It felt so surreal, that I was going to have another baby. My pregnancy held all sorts of new complications I had to navigate through, including prenatal depression, group B strep, and the eternal kitchen remodel. The latter half of my pregnancy was spent praying I would go into labor after my due date, something that was unlikely since I had only ever given birth before or on my due date. Leading up to the due date, my husband would ask me, “are you in labor?” because of the Braxton Hicks I experienced on a nightly basis. It became a running joke when he began asking at completely irrelevant moments. The only time I replied, “I think so” was when he asked me three hours before Dennis was born. 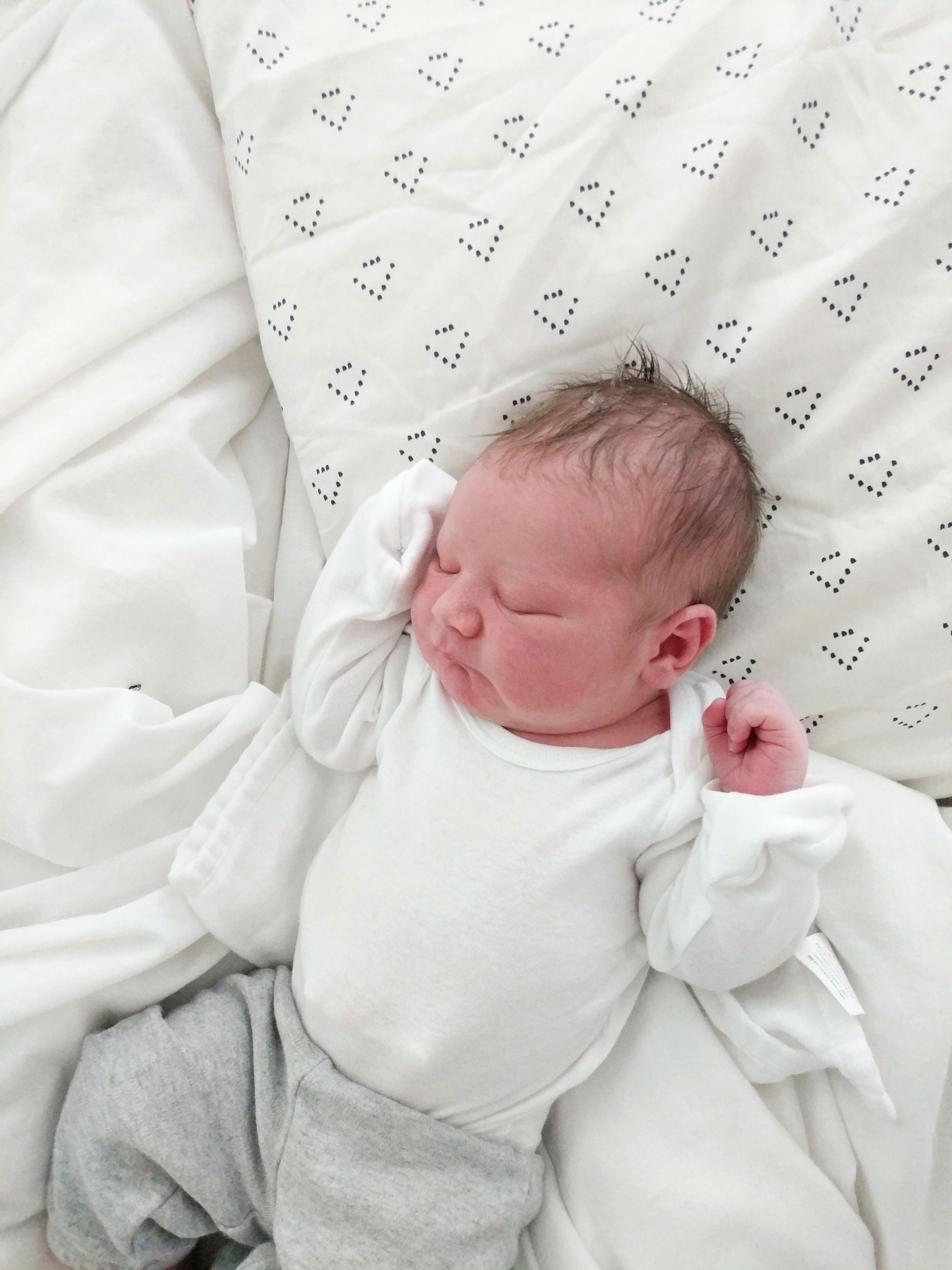 Every night after I was full term I’d do an assessment of the house and declare whether it was a good night to give birth. If the house was a mess and there was a lot of clutter, it would be declared to be not a good night. But if things were neat and tidy I’d go to bed comfortably ready for labor. Of course I wanted as much time as possible before he arrived in order to chip away at my lengthy to do list, so when my due date came and went, it was an answer to those prayers.

On Tuesday March 13th, two days after my due date, I had a midwife appointment and brought little Pip along. This became our last special time together as him as the baby of the family, something I will look back on and cherish. Afterwards, instead of working on the house or cleaning, I opted to take a nap, which was rare during the end of my pregnancy. When I woke up, I gathered everyone in the car to bring Philip coffee and pick up some staples from Trader Joe’s (maple cookies are most certainly a staple). On the way home we picked up pizza because grocery shopping gives me the excuse to not cook dinner. I spent the night after dinner running to Home Depot for remodeling supplies (of course), folding laundry and researching the perfect natural finish for a butcher block counter. Before going to bed that night, I determined the house was too cluttered to give birth and I made a mental list of what I needed to do the next day. 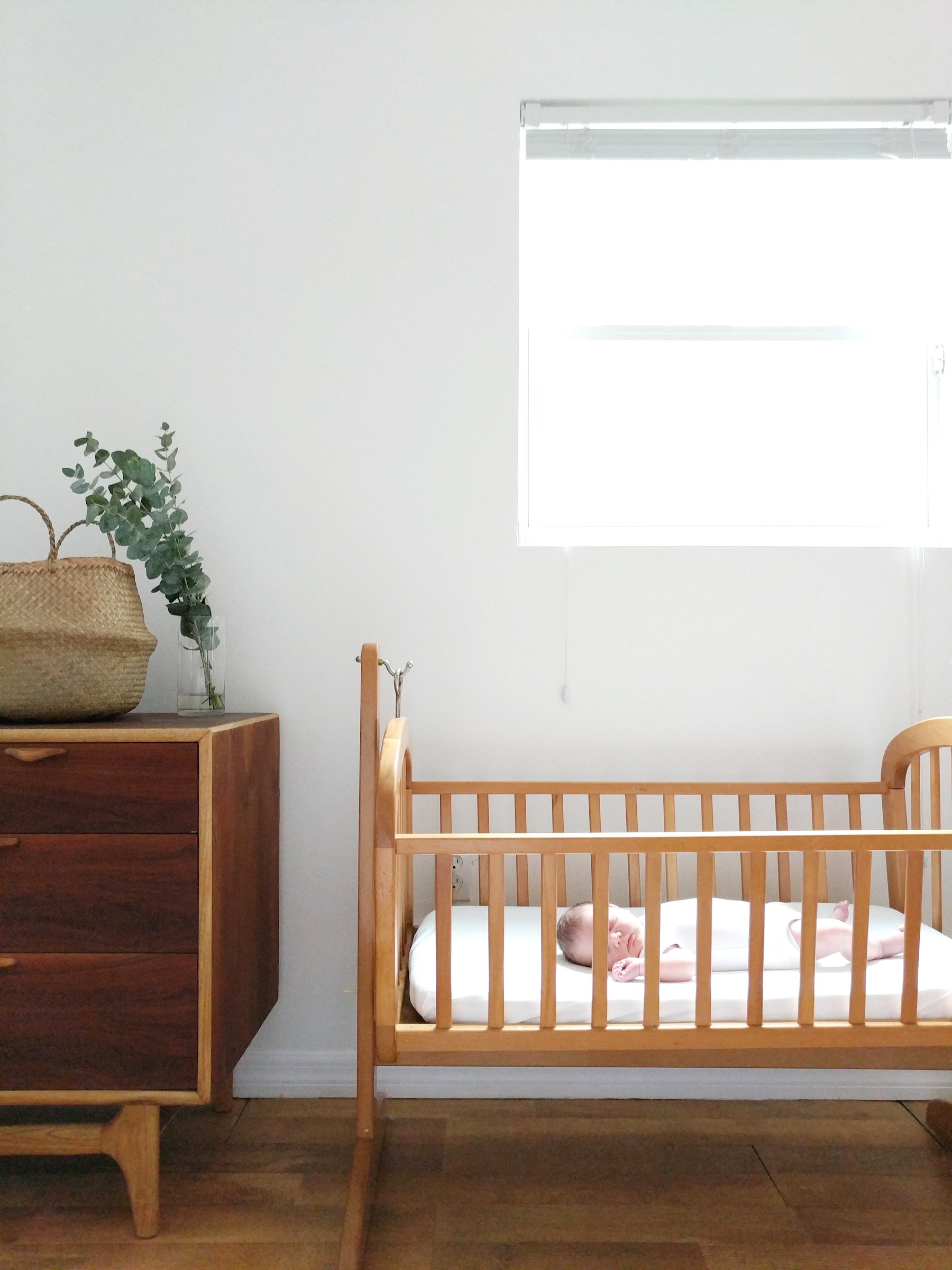 I woke out of a deep sleep at 5:46am to the familiar feeling of a contraction. I tried going back to sleep to no avail, so I began timing my contractions instead. They were seven minutes apart for a half an hour then quickly jumped to two minutes apart. While Philip took a shower for the day, I made myself a quick breakfast, put the laundry away, and decluttered the best I could. Have I mentioned I love nesting during pregnancy?

During that time, around 6:30am, I texted my mom to see if she was awake and prepared to pick up the kids, even though I doubted if I was in actual labor (as I always do, even the fourth time around). Within ten minutes I texted again to tell her I was pretty positive it was the real deal. I also called my birth center at 6:50am to let them know I’d be coming in that morning. After speaking to my midwife and expressing the desire to labor at home for as long as possible, we agreed we’d touch base in an hour.

Contractions were still consistently two minutes apart and getting stronger so we asked my mom to come over and pick up the kids, who were just beginning to wake up. I gathered the remaining supplies I thought I would need for the birth center and kissed the kids goodbye.

We left the house and headed to the birth center at 7:35am, perfect timing for rush hour traffic through some of the worst roads in town. Five minutes into the car ride I was unbuckled and flipped over on my knees to labor through the contractions. There was bumper to bumper traffic on the way that Philip avoided by cutting through a neighborhood. We arrived at the birth center around 8:15am.

I tested positive for Group B Strep during pregnancy and after much stress and debate, decided I would get the IV antibiotics. So upon arrival, my midwife checked my cervix to see how far along I was. I honestly can’t remember how dilated I was but I’m assuming I was probably completely effaced. I suddenly felt nauseous but thankfully that passed quickly. I then tried to use the bathroom before getting into the birthing tub. I remember looking at the clock and seeing it was 8:30am. Once I was in the tub, the birth assistant began to give me the IV antibiotic in between contractions. Although it took two tries to find a vein that would work, I was hydrated so the IV went in quickly.

During labor I tend to convince myself I will be in labor for a long time, so when I felt the urge to push, I first resisted and wanted to make sure I was ready. I checked to see if the baby was lowering and there was absolutely no sign of him. My midwife, Kat, was nearby monitoring my contractions when she asked a nurse to get the birth assistant. The nurse asked if I was close to delivering and Kat answered a confident yes. I completely doubted her and spoke up, saying, “I don’t know, I couldn’t feel his head.” Kat, rightfully ignoring my doubts, reassured the nurse and repeated to find the birth assistant.

A minute later, during the next contraction, I pushed and Dennis’s head was birthed. A few impatient moments later (it felt so long!), while everyone in the room stood by to help guide him out, he was born and I was lifting him out of the water while tears filled my eyes.

The whole pregnancy the fact that I was having another baby felt surreal, so the reality that I was actually holding my newborn baby felt unreal and delightfully shocking. He was here! He was actually here, my new baby boy. His eyes were wide open since the moment I held him on my chest and cried the sweetest newborn cry as we moved to the bed and settled in to get acquainted. He was eager to nurse right away and kept his eyes open for the majority of our time at the birth center. 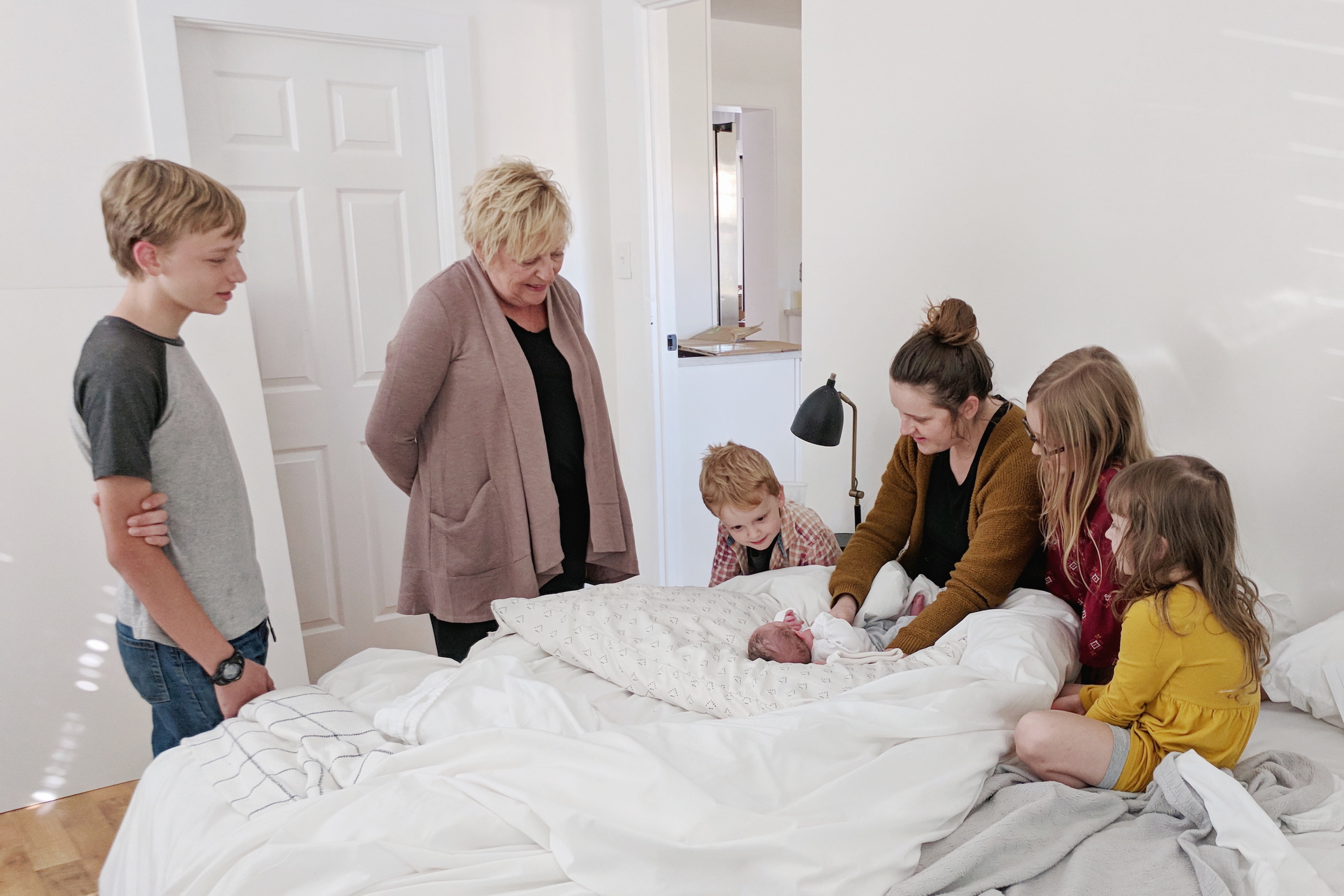 Later that day, after we had arrived back home and took a nap, my mom brought over the children to meet their new baby brother. He was beginning to cry, but the minute he heard his big brothers and sisters, his eyes widened and he stopped fussing. It was amazing to witness him observing his siblings, as if he was finally putting a face to the voices he had heard all along.

He fits so perfectly in our family, of course, and now we can never imagine life without him.