Hi my name is Kimberly and I burn bacon. Truth is, I didn’t even like bacon until I met my husband. He convinced me to try some, even though I told him I had never liked bacon. Now it wasn’t an instantaneous love, it took time to grow on me but after the third, fourth or fifth time of having it, I was hooked. It really hit me when I was pregnant with Isabelle, no bacon stood a chance of surviving with me around.
Problem is I just can’t cook it. Within our first week of being married, I woke up early one morning and thought I would impress my groom with the smell of bacon in the morning. I had never cooked it before this moment but had watched Philip do it plenty of times. When it was just about done, I estimated I would have the time to wake him up and tell him breakfast was ready. The first thing he said when he woke up was, “It smells like burnt bacon.” Doh! He convinced me it was still good, but I knew it was oh so bad. From then on, Philip has been the one who brings home the bacon and prepares the bacon.
Except the other day. I decided I would try my hand at this sweet bacon thing. I failed… not once but twice.
First Philip and I decided we wanted to make candied bacon. He dipped the bacon in brown sugar, seasoned them with black pepper and placed them on a baking sheet lined with foil. 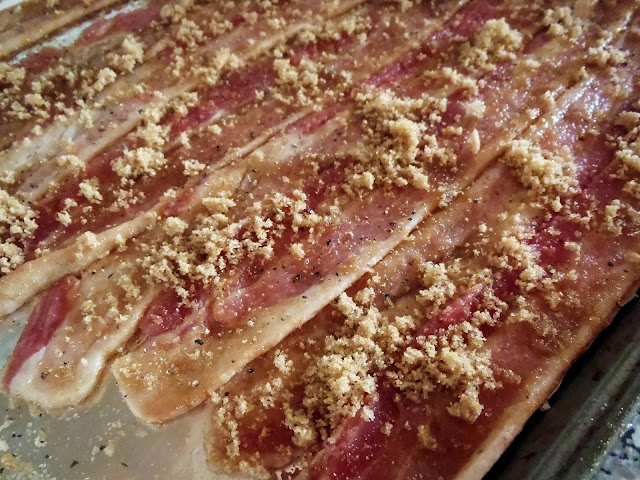 It was my job to check on them, most of them came out okay but some of them didn’t make it. The ones near the edge of the pan were the unfortunate ones. Regardless, they were still pretty dang good. The pan we cooked them on needs some serious surgery, though. I am thinking a jackhammer will do the trick of removing the burnt brown sugar. 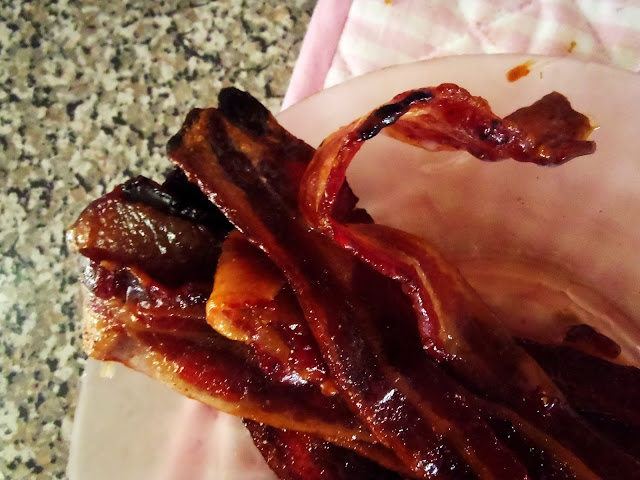 As for the remaining 5 pieces of bacon, I cooked them up (and yes, burnt them) and made some bacon and blueberry pancakes using a waffle recipe from 20 Something Cupcakes. They were difficult to cook right, I wonder if using whole wheat flour makes them cook differently. I didn’t beat the egg whites like the recipe instructs since that would have meant more dishes to clean. That could have been the problem, or it could have been that they just weren’t meant to be pancakes. 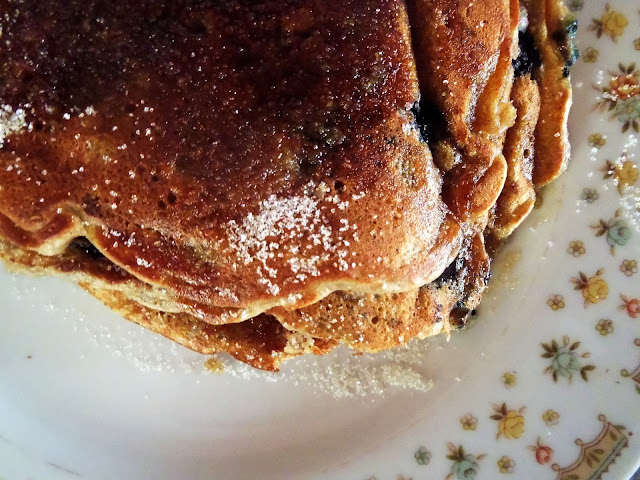 They came out okay in the end but they just weren’t my plate of bacon. Something about bacon in pancakes just weirded me out. That was just my opinion, though. Elijah called them the most extraordinary pancakes he had ever tasted, Eliana loved them and Philip called them interesting in a good way. For me, though, I will just stick to bacon on the side of my pancakes.
I am going to share with you today a recipe for the candied bacon we made. I hope you have better baking bacon skills than me, if so, I am sure yours will come out just fine.

Toss bacon in shallow bowl with brown sugar one by one. Place bacon on prepared baking sheet and season with black pepper. Sprinkle remaining brown sugar on top of bacon. Cover with aluminum foil and place a second baking sheet on top to keep bacon flat.

Bake until bacon is cooked through, 15-20 minutes. Remove second baking sheet and aluminum foil, return bacon to oven and cook for an addition 5 minutes to crisp bacon.

Remove from bacon from pan while hot, let cool slightly and serve.