I’ve already told you about Jeni Britton Bauer’s way of making ice cream using corn syrup, tapioca starch, and cream cheese and now I am back to share with you an excellent recipe from her book. I am borderline obsessed with this berry crisp ice cream. 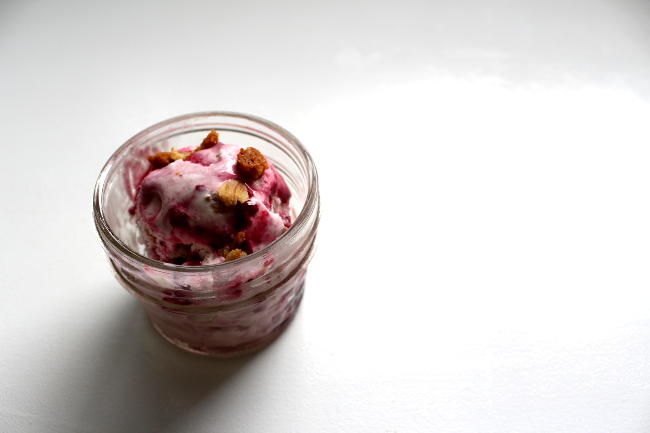 Brambleberries (or cherries) swirled together with a crisp streusel (made with brown sugar, butter, and oats) layered in vanilla bean ice cream. I’ve even been known to eat the crisp streusel straight out of the freezer. 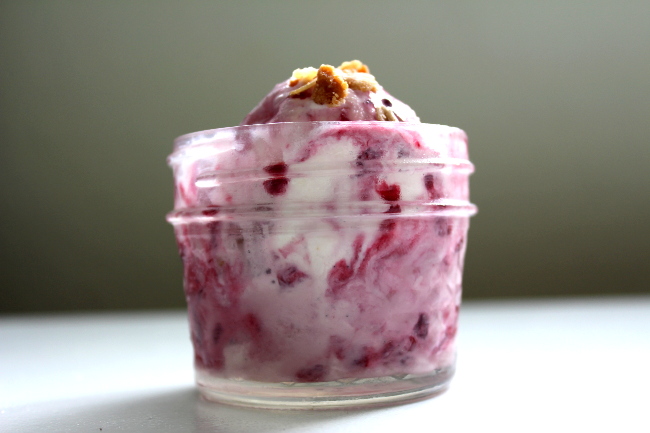 Just think about it, it is common practice to serve a fresh out of the oven blackberry crisp with a scoop of vanilla ice cream. So why not mix it all together in a remarkable ice cream?! 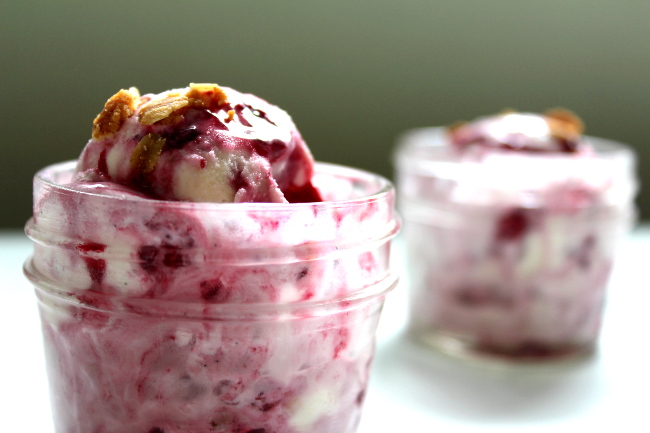 There are three main components to this ice cream; a vanilla ice cream base, a oatmeal crisp, and brambleberries simmered with sugar to prevent freezing. 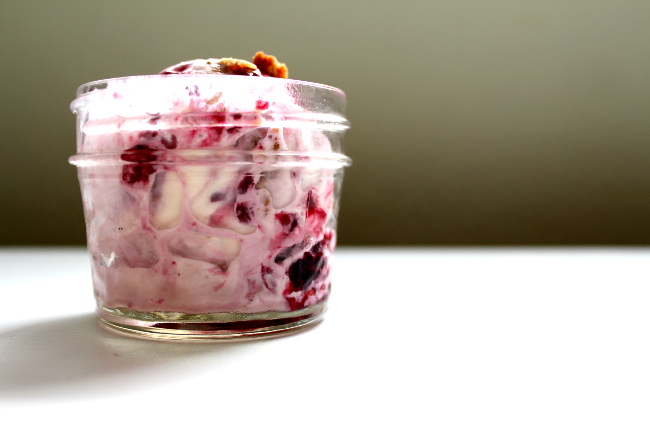 First thing first is to make the oatmeal crisp. It starts off similar to my blackberry crumble pie topping, using brown sugar, flour, butter, and some cinnamon. I always use my favorite pastry cutter to make this process easier. 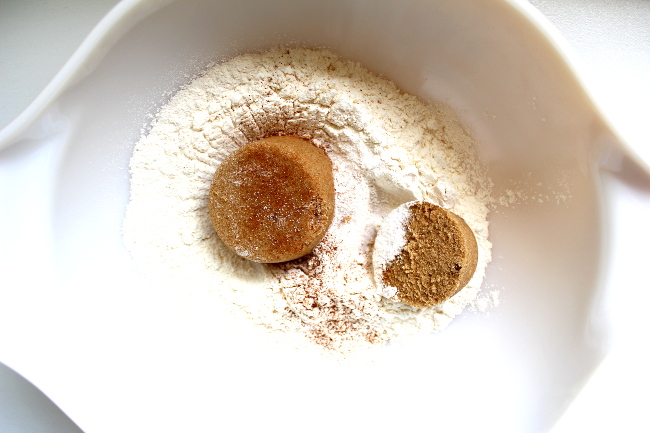 Once you cut the butter into the dry ingredients enough to form moist clumps, add rolled oats, mix, and spread out on a baking sheet. 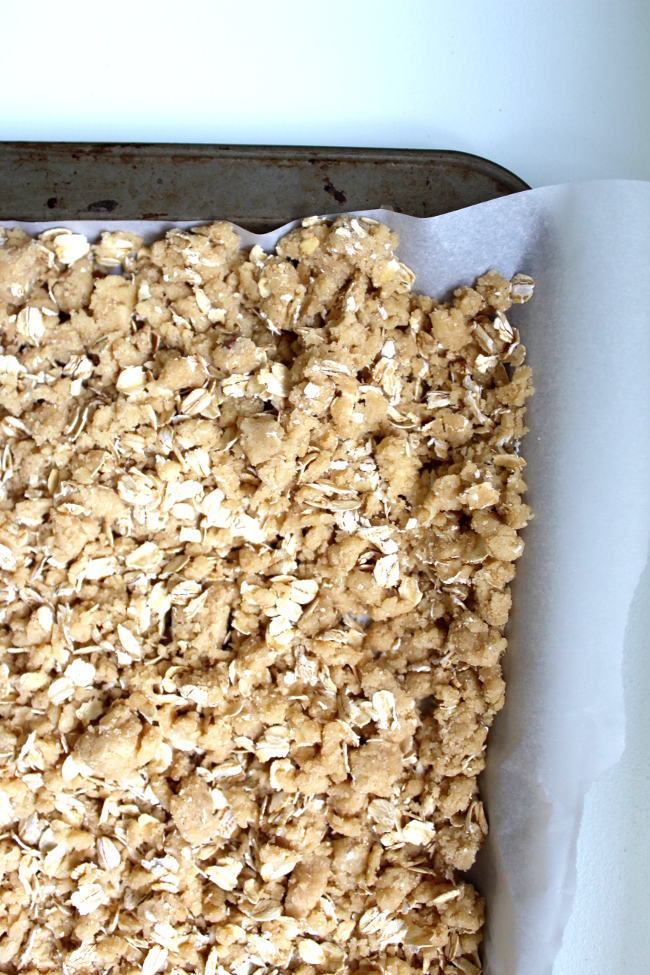 After baking for thirty to forty minutes, you are left with golden deliciousness. I promise I won’t tell if you sneak a bite or two… or ten. 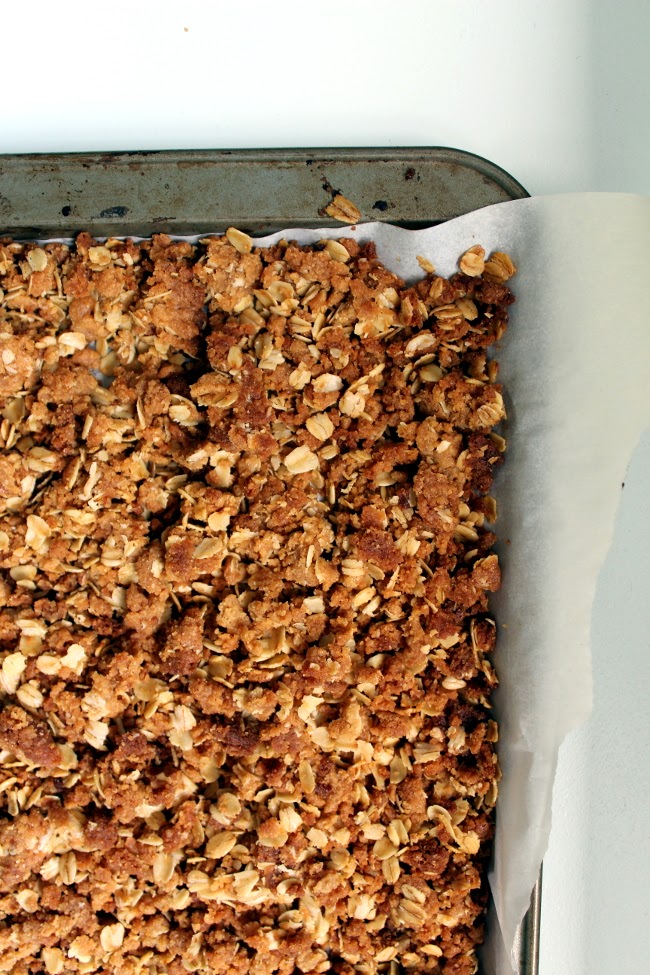 After that’s cool, stick it in the freezer until you are ready to use it. While you are waiting for it to cool, make the vanilla ice cream. This method is very foolproof, since there is no risk of scrambling egg yolks. To start off you’ll want to prepare the corn starch slurry and the cream cheese. Measure out two cups of whole milk and in a small bowl whisk together the corn starch and just enough of that milk to dissolve the corn starch. While you’re at it, whisk cream cheese in a medium bowl with a pinch of salt until it is smooth. 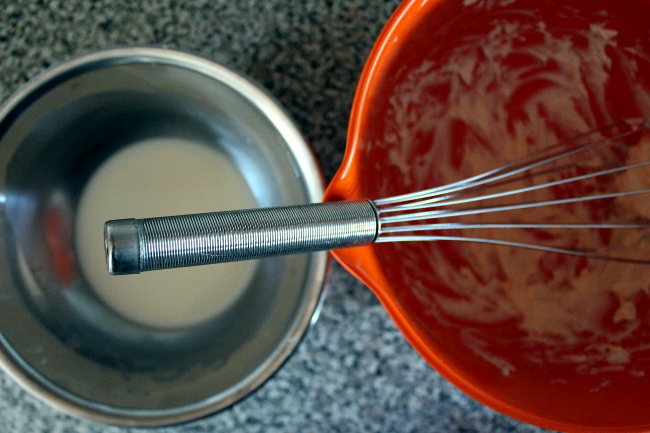 From there you will combine the rest of the milk with heavy cream, sugar, corn syrup and a vanilla bean that has been split and seeded in a heavy duty saucepan. Bring that to a boil over medium-high heat and set a timer for 4 minutes. Jeni notes that the timing is exact. Once the timer goes off, remove the saucepan from the heat and slowly whisk in the corn starch mixed with the milk. You may need to re-whisk the corn starch before pouring it in if any settled at the bottom. Bring the mixture back to a boil over medium-high heat and boil until thick, about 1 minute. I set a timer for this as well, just to be sure. Then, while whisking the smooth cream cheese, slowly pour in the custard. Then, once this has been covered and chilled in the refrigerator, remove the vanilla bean and churn it in an ice cream maker. 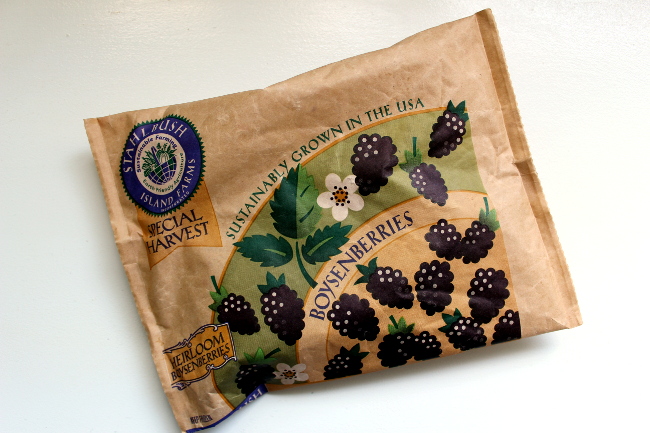 Once the ice cream is churned, it is time to layer in the berry crisp part. Start with a container that has been chilled in a freezer and drizzle some of the berry sauce on the bottom. 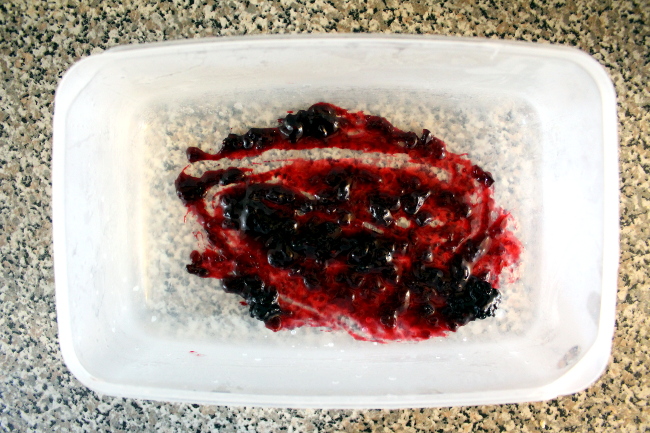 Then layer in some freshly churned ice cream and top that with some of the crisp. 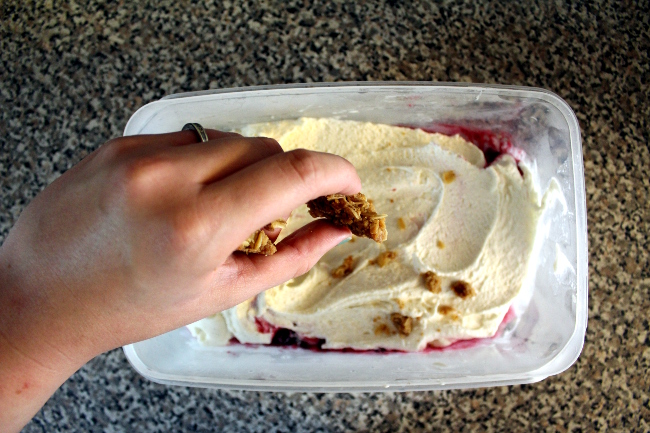 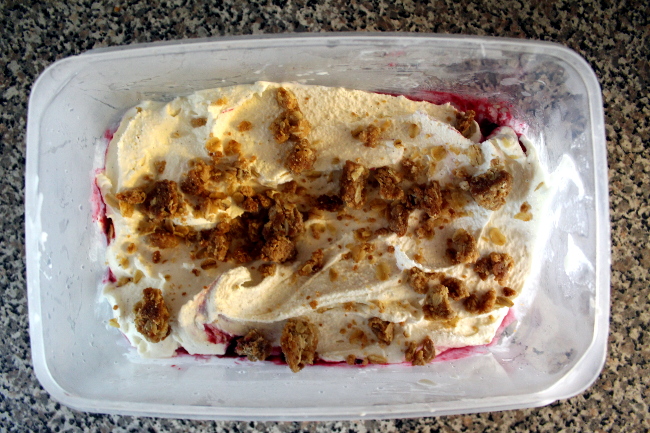 Now repeat with the berry sauce, ice cream, then crisp. Plan to use all of the berry sauce but use as much crisp as you’d like. I recommend using plenty, but if you end up with extra, it’s awesome to snack on when the kids aren’t looking. 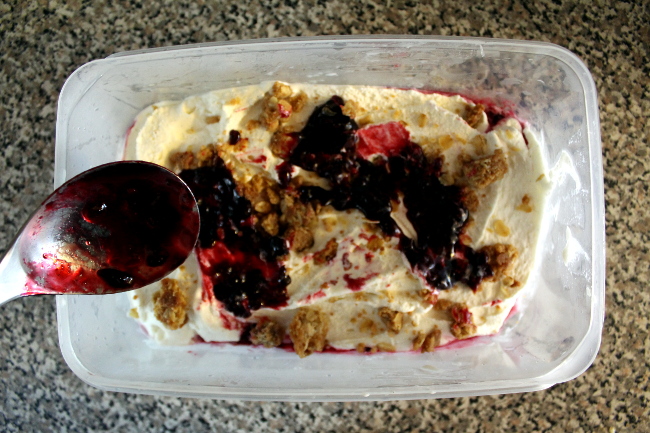 Top the layered ice cream with parchment paper, cover the container and let is harden in the freezer for at least four hours. Then, scoop and enjoy. 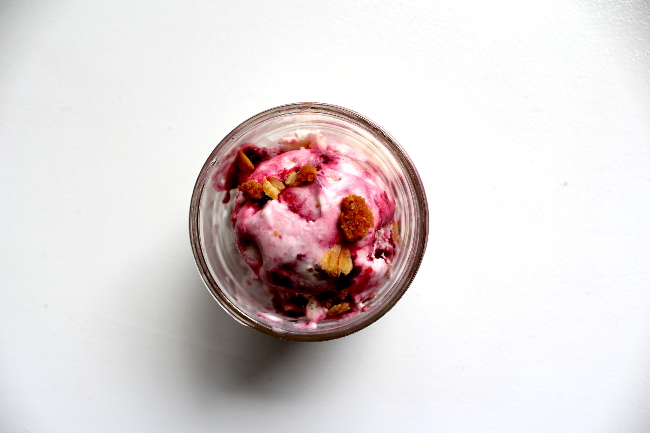 I don’t think you will have a problem enjoying. This. Is. So. Good. I can’t say it enough. 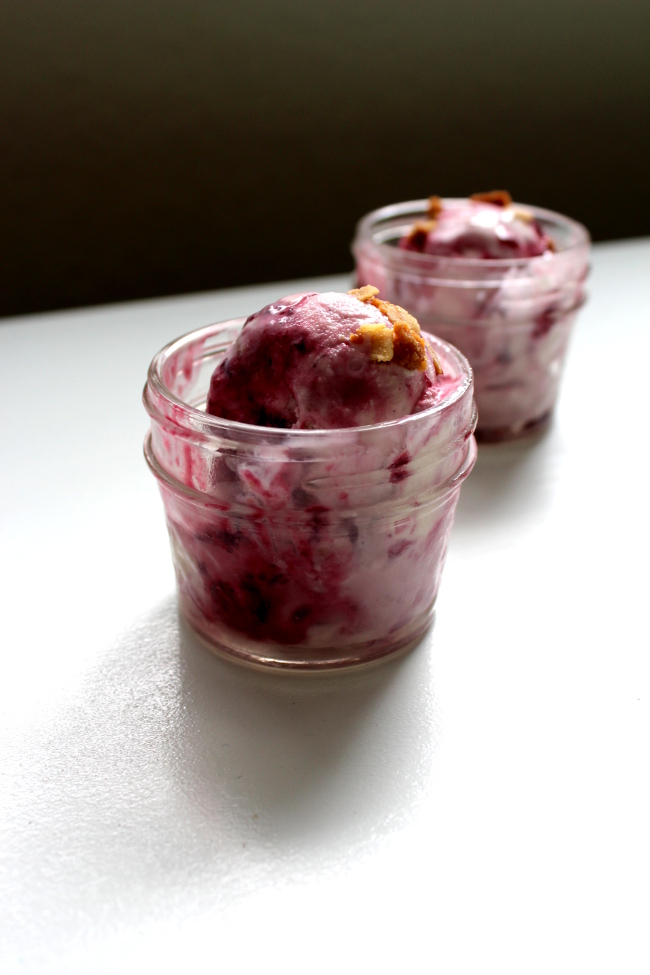 Mix about 2 tablespoons of the milk with the tapioca starch in a small bowl to make a smooth slurry. Whisk the cream cheese and salt in a medium bowl until smooth.

Combine the remaining milk, the cream, sugar, corn syrup, and vanilla seeds and bean in a 4-quart heavy duty saucepan, bring to a rolling boil over medium-high heat, and boil for 4 minutes. Remove from the heat and gradually whisk in the tapioca starch slurry. Bring the mixture back to a boil over medium-high heat and cook, while stirring, until the mixture is slightly thickened, about 1 minute.

Gradually whisk the hot custard into the cream cheese, cover the bowl and place in the refrigerator to chill completely, at least 2 hours. When chilled, remove the vanilla bean, stir the custard and freeze in an ice cream maker according to manufacturers directions. Place a container in the freezer while the ice cream is churning.

Press a sheet of parchment paper on top of ice cream, cover the container and let harden in the freezer for at least 4 hours.

Combine the berries and sugar in a medium saucepan and bring to a boil over medium-high heat, stirring occasionally. Boil until the mixture reaches 220 degrees, or until it slightly thickens and the berries smash easily, about 7 minutes. Let it cool slightly, then force through a sieve to remove most of the seeds. Refrigerate to chill before using

Preheat the oven to 350 degrees

Stir together the flour, sugar, cinnamon and salt in a bowl. Using a pastry cutter or your fingers, cut in the cold butter until the mixture resembles course salt. Stir in the oats, then spread the mixture out on a baking sheet lined with parchment paper. Break up any large clumps into 1/4 to 1/2 inch sized crumbs.

Bake for 30 to 35 minutes, until golden brown. Stir occasionally to prevent burning, bringing the corner pieces into the center. Let cool completely, then freeze until you are ready to use. This makes about 3 cups and will keep in the freezer for up to 1 month.