I don’t know why but I always pronounce fusilli as fusillini. Where on earth did I find that “n”? I have also been known to pronounce comforter as “comfterble”… yes, like comfortable, and anonymous as “anomynous”. Don’t ask… I blame my parents. Mom, Dad, it’s okay, at least I know my ABC’s and 123’s.

Okay, so since I have succeeded at going completely off topic I will now bring us back to topic. Pasta. And sausage. And some vegetables to call it healthy. You see, I like kale. It’s extremely good for you and I feel like I accomplish something when I eat it. But I have a hard time making meals with it. I really like using it in The Pioneer Woman’s kale and sausage strata and making kale and sausage soup as well as mixing it into smoothies but I was ready for a change. 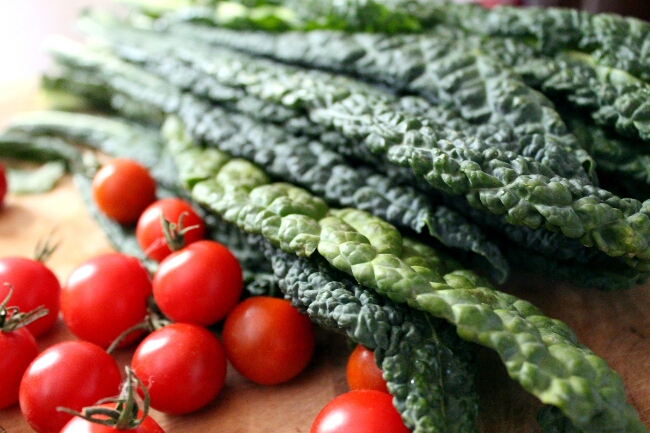 Behold another kale and sausage recipe, this time mixed up in one of my favorite savory things, pasta. Add to that homegrown cherry tomatoes, multiply it by Parmesan cheese and divide by four and you have yourself a delicious meal. 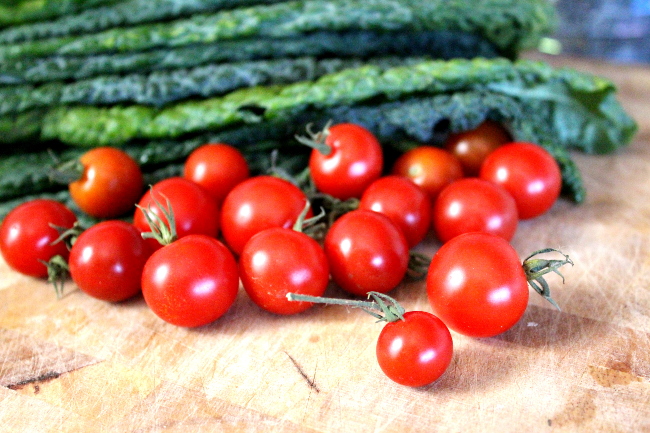 So lets get started, shall we? And what better way to start than by browning some ground sausage. A lot of places sell ground Italian sausage but I usually just buy the links and remove the sausage from its casing. Which is like, a huge step for me… since I used to be all meat scared and queasy when I would even think about touching the stuff. My poor husband in those early days of me cooking… 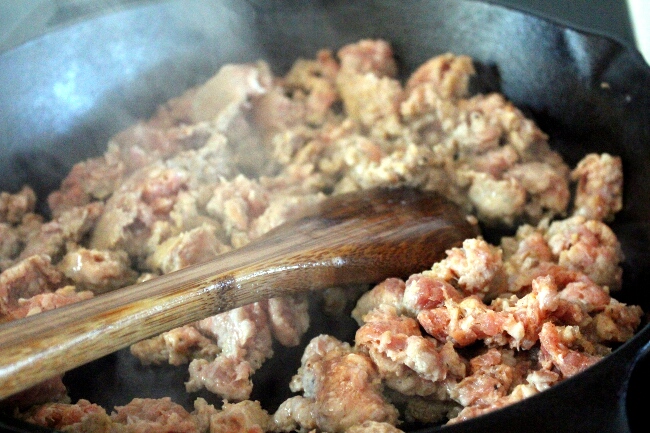 Kale enters the equation once the sausage is cooked through. 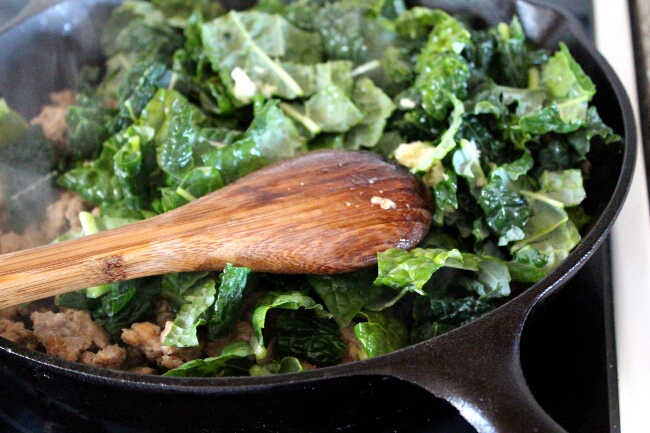 To the kale and sausage add some chicken stock. Make it homemade bone stock to feel really accomplished. Add some garlic and red pepper to all that, too. 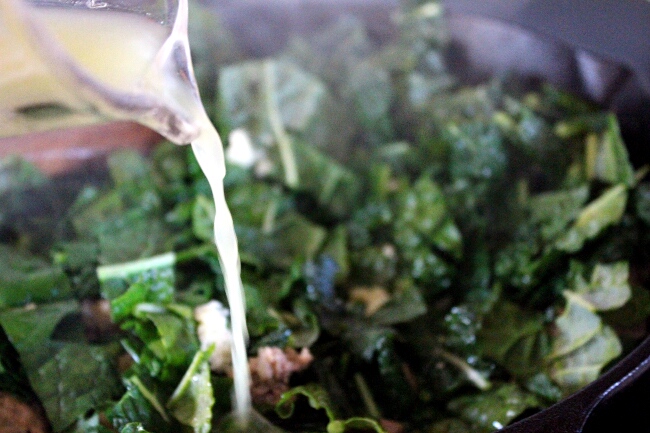 By the way, if you have older kale with thicker stalks, make sure to remove them so everything cooks evenly. It will take about 5 minutes to cook the kale then add cherry tomato halves and cook until they are wilted. 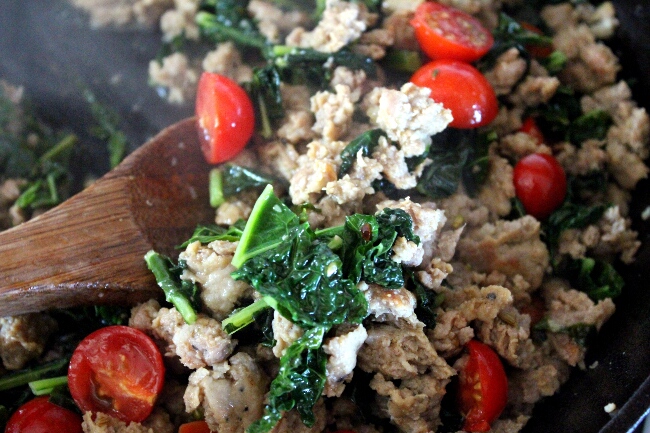 Once that is done it gets added to cooked fusilli pasta. Or really any pasta of your choice. I won’t judge you for using corkscrews or penne, I promise. 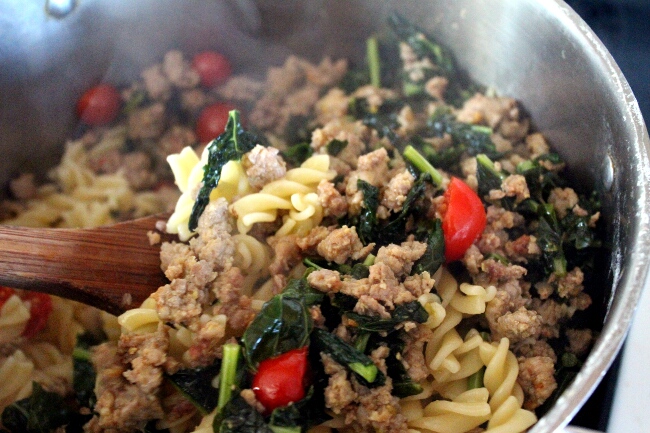 What would dinner be with cheese? Parmesan, please. 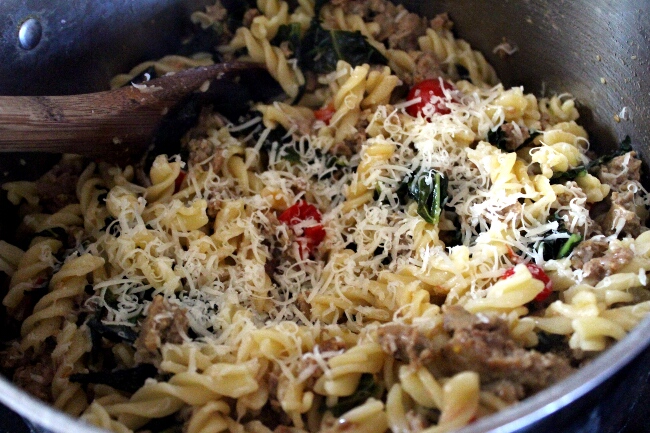 How about some more? Sounds good. 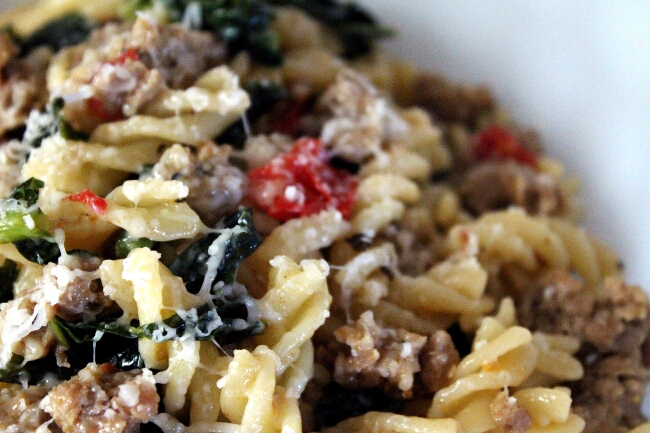 It tastes even better. I really enjoyed how simple this recipe was but how it tasted like I put time and effort into it. Serious Eats actually has you blanch the kale separate from the sausage but I’m all about one or two dish meals. Seriously, anything over two dishes and it better be a special occasion. 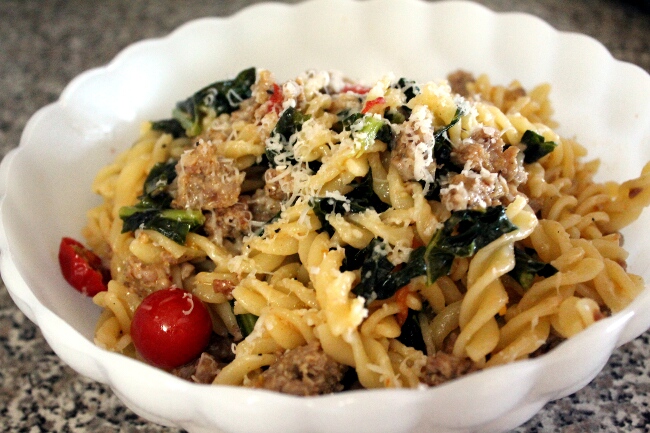 Now Eliana has been boycotting dinner, even though she plays with it, but I can say that Philip and Elijah both enjoyed it right along with me. 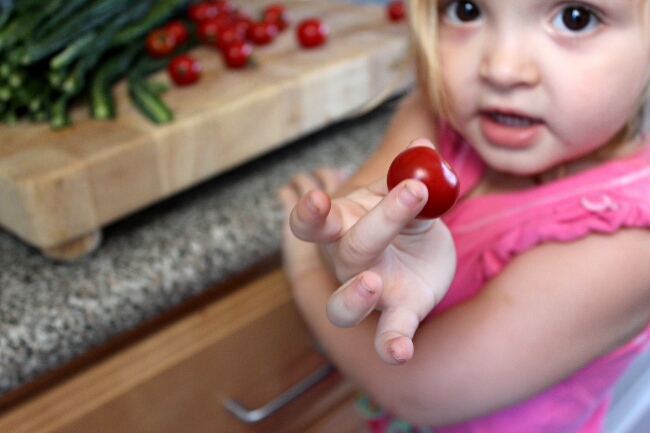 Bring a large pot of water to a boil and cook pasta according to package directions, drain and set aside.

Meanwhile, cook the sausage in a large skillet over medium high heat. Once cooked, add the chopped kale, garlic, red pepper and chicken stock. Simmer until the kale is cooked through, about 5 minutes. Add the cherry tomatoes and continue to cook for about one minute, until they begin to wilt.

Mix the sausage, kale and tomatoes in with the pasta, add the Parmesan cheese and season with salt and pepper to taste. Serve with addition Parmesan cheese.