Whoa, exciting title, I know… but hey, it’s exciting for me. Remember in January I managed to re-organization my kitchen, including our hallway closet turned pantry? Yeah, you might not. That’s okay. 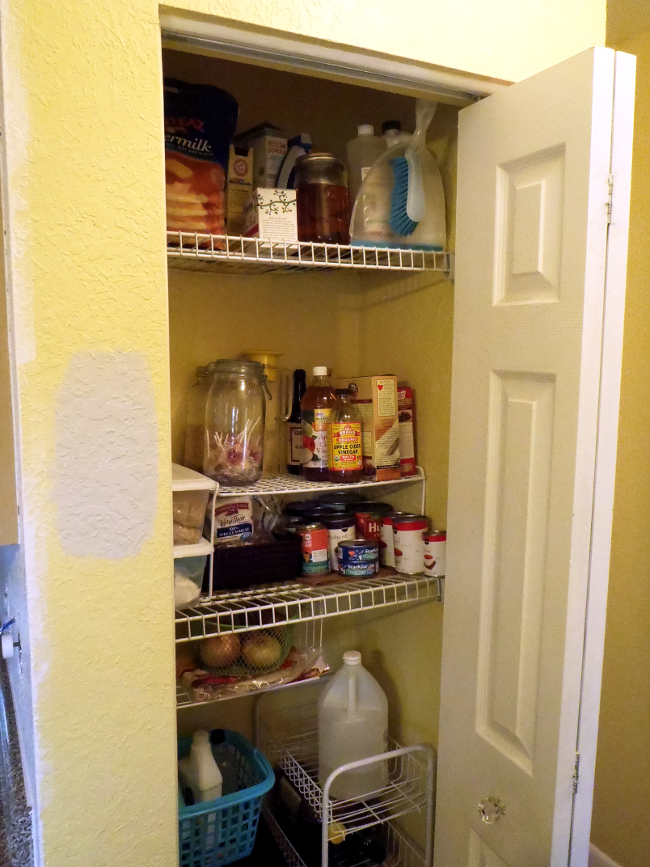 After a good solid six months, that neat space turned to a hot mess. Oh. my. goodness. 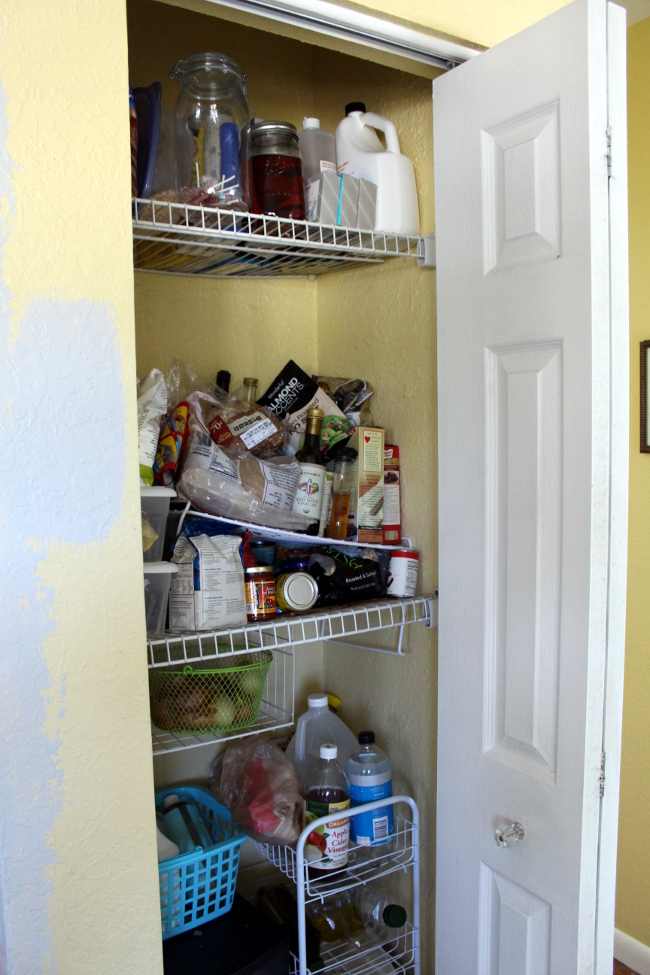 And just to keep it real, here’s a close up… blurry picture and all. Speaking of blurry pictures, be forewarned, this post contains a fair amount of blurry low lit pictures. It’s been cloudy and my babies aren’t keen on the idea of me taking pictures of things other than them… so give me a break. 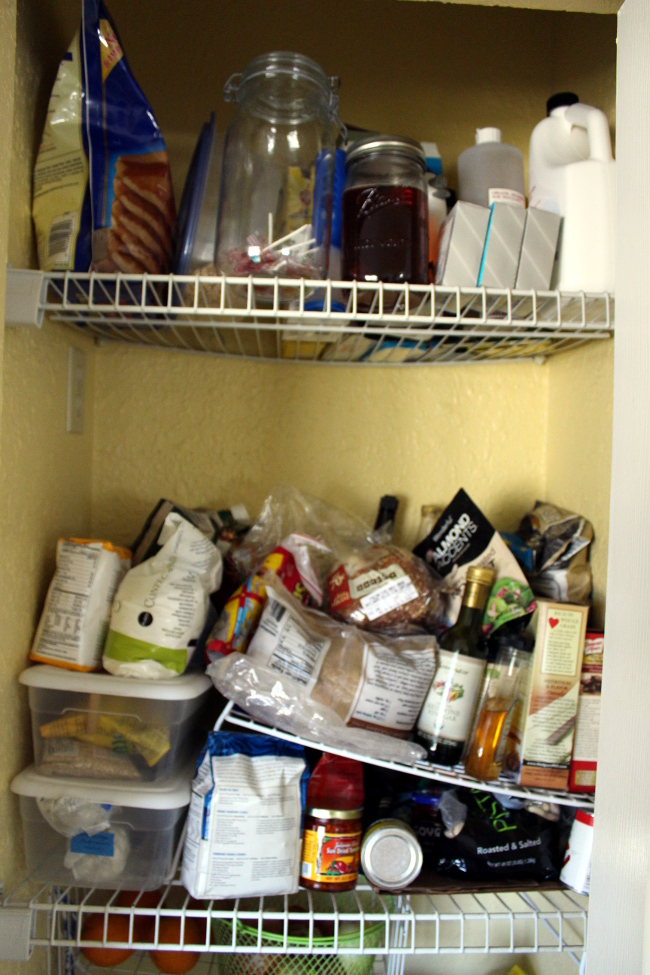 I mentioned back in January that I wanted to install floor to ceiling shelves in one of our three household closets. Well guys, I got it done! Nothing fancy, that’s the idea. This is the lazy diyer’s way of hanging shelves. 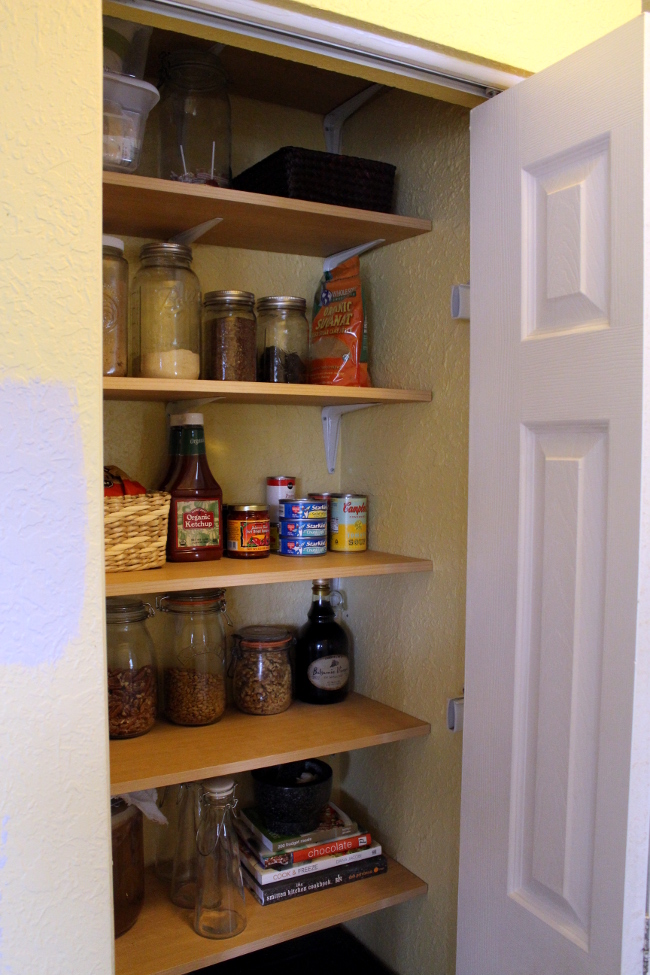 The logical first step is to empty out the existing shelves. Of course this is after gathering your supplies, which in my case was an old disassembled Target bookcase. I hoarded it for at least a solid eight months, then cut the dismantled shelves to size. (Actually, my step-father did.) I had planned on painting them using an oil-based primer and white latex paint, but I opted for the less-work path. Oh, and brackets. Those are important as well.
Back to the first-ish step, emptying out the closet caused my kitchen to look like this. 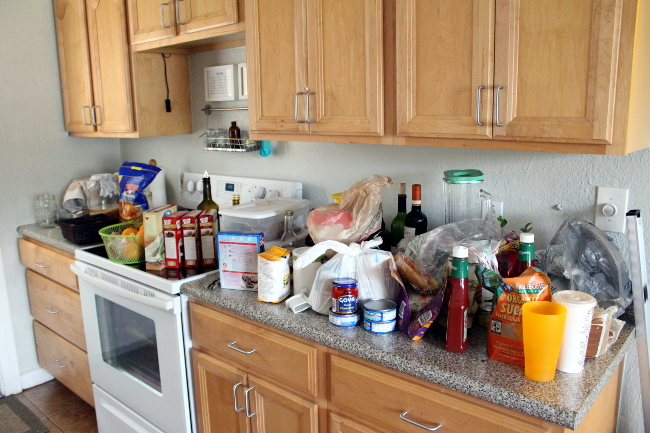 I can’t blame the pile of dishes on the closet, though. I’ll take credit for those. 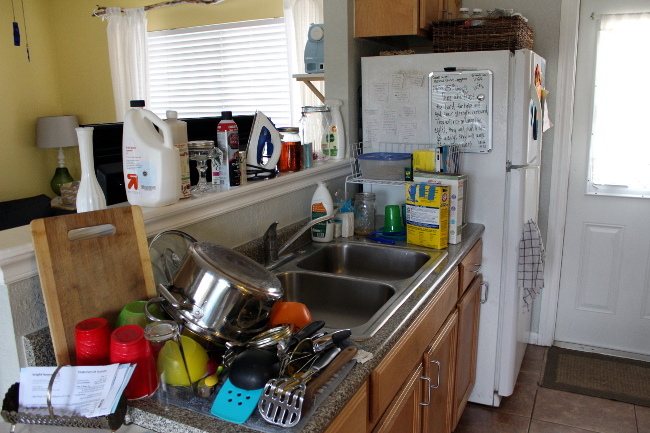 My pantry pretty much vomited throughout our whole house, including our bedroom. 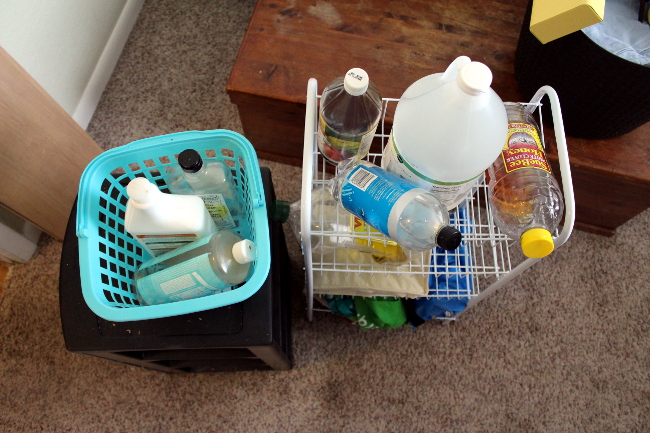 So once I had a clean slate, I put up painters tape to get an idea of where I wanted to shelves. 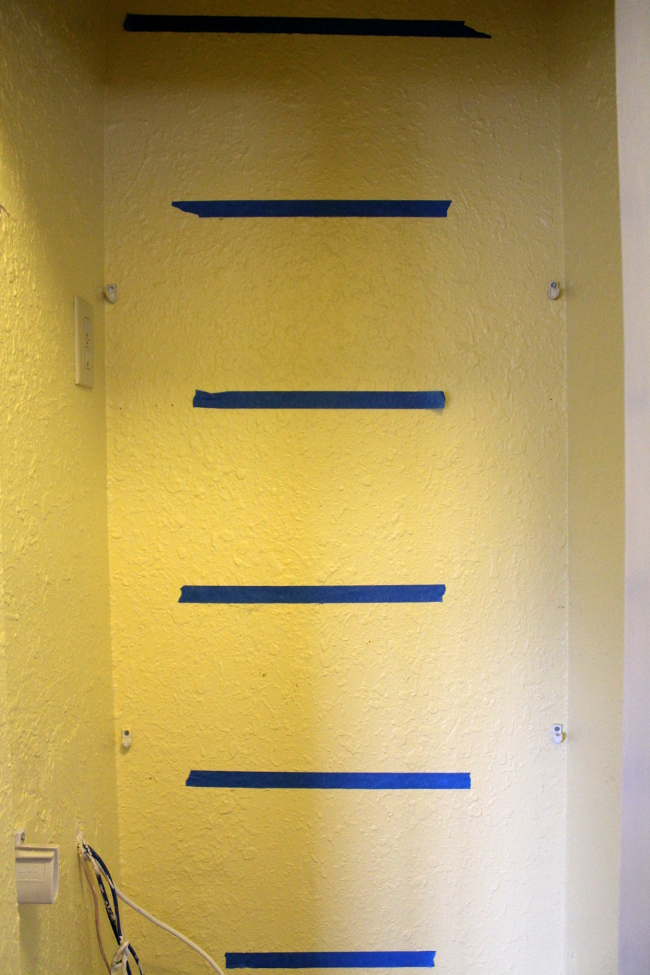 This is the point where any non-lazy diyer would paint the closet and work at removing the previous Rubbermaid wire shelf brackets. That’s not me. Those little guy’s were not coming out and I was not painting this closet. 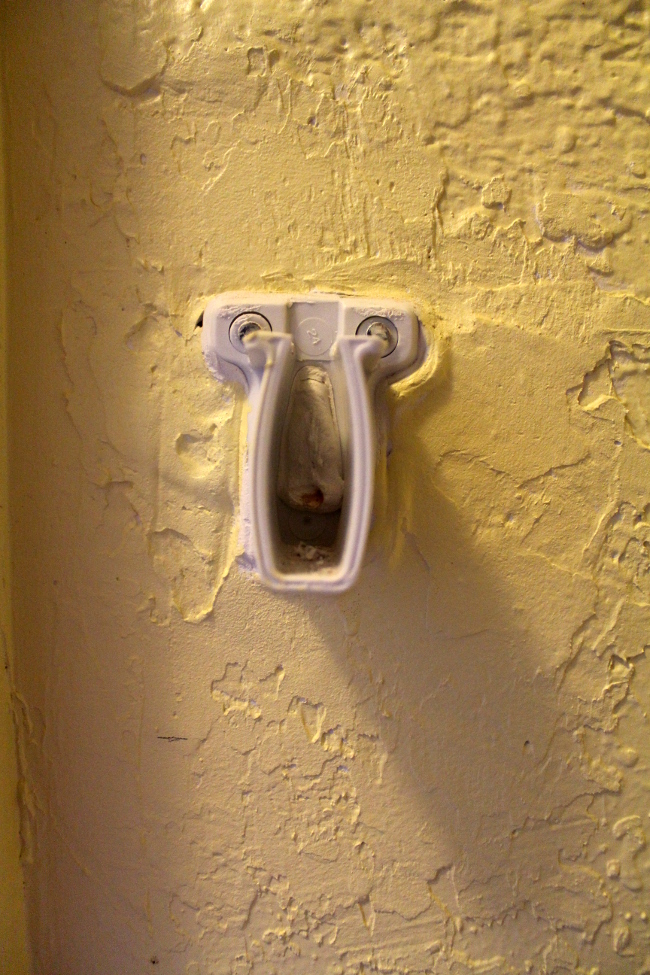 Well, one of those brackets wiggled on out, but I still have yet to patch the holes. In due time, everyone… in due time. 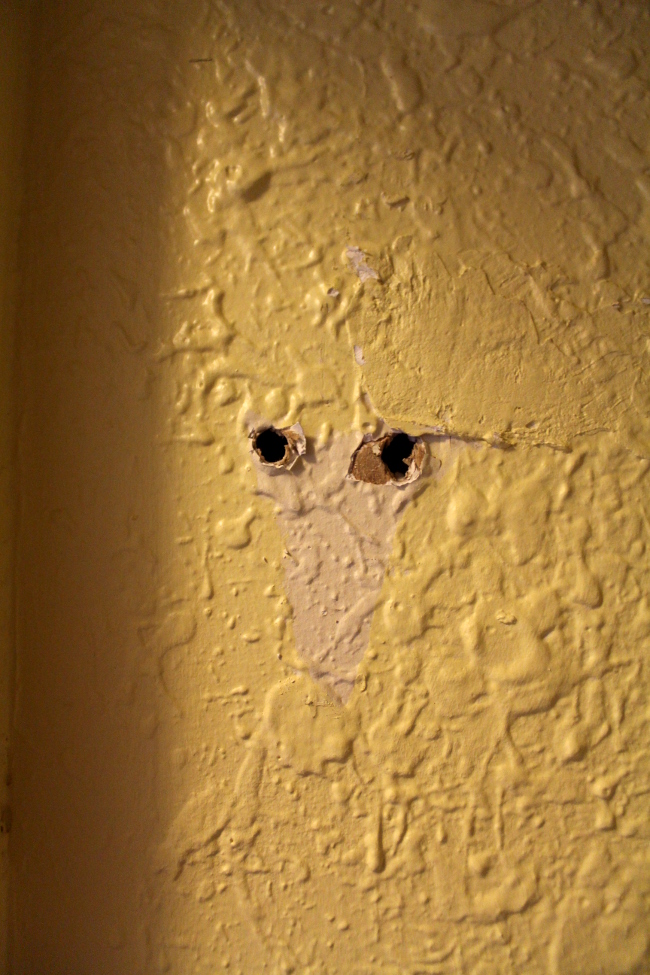 And then there were these wires, don’t ask me about them because I don’t know. I just worked around them and it worked out just fine. 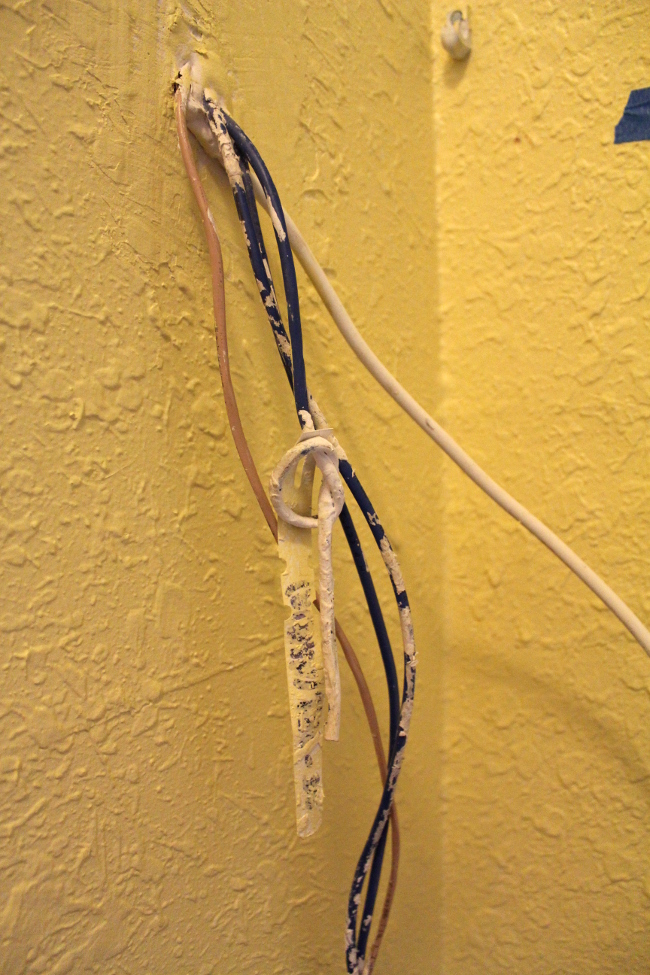 Once I had an idea of where I wanted the shelves, I attempted to find a couple of wood studs. Now, studs are my nemesis. I’ve tried stud finders , I’ve tried knocking and I’ve tried measuring. What does the trick for me is finding them by hammering nails into the drywall. If they go in all the way, no stud. If they hit something… well, you guessed it… there’s a stud. 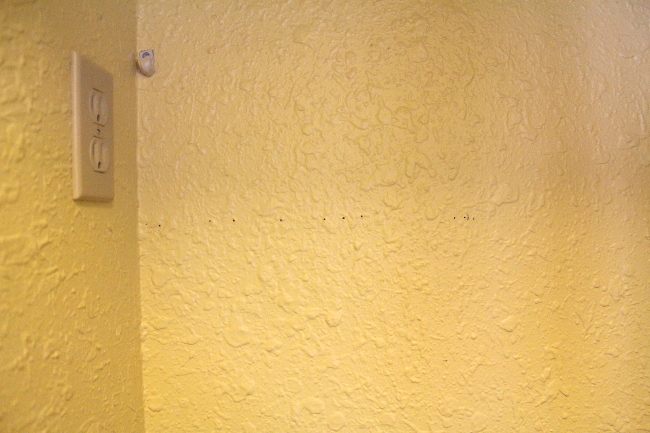 I was hoping for two studs placed at a nice spacing, but instead I found two studs at the very edge of where the shelves would go. Thankfully, there was also a stud in the middle of those two. Without a bracket in the center, the shelves would bow due to two brackets on the very edge. Not very pantry worthy. So with an additional bracket per shelf needed, I picked up some more from Lowes.

So once I had my proposed bracket spacing, I drew a level line down the wall where the center bracket would go. Then, I measured six 11 inch marks down the wall, and drew level horizontal lines. 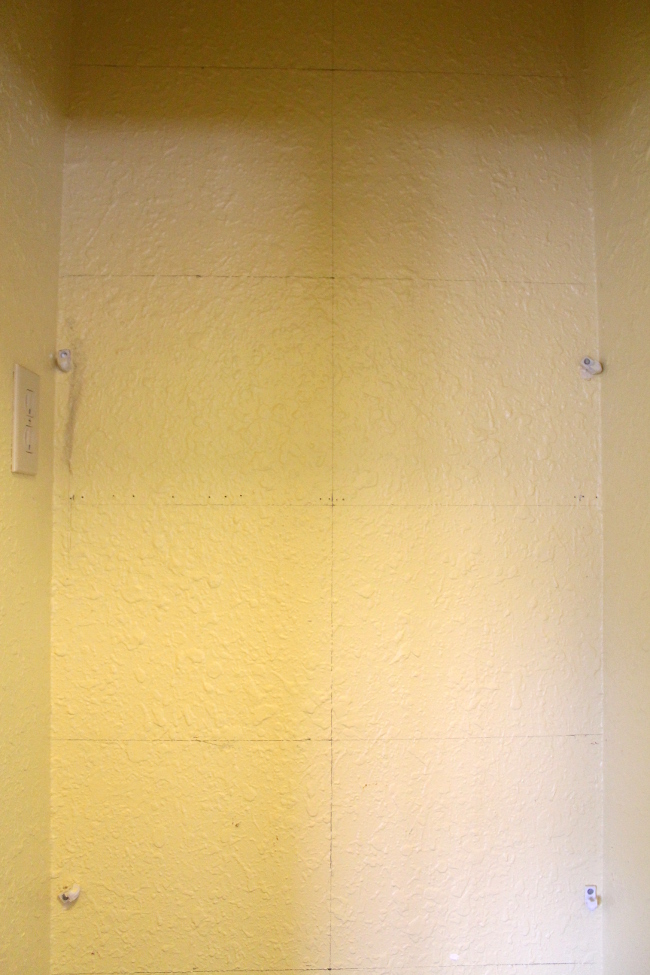 I then marked each drill hole for all of the center brackets, drew additional level lines, and lined up the outer brackets with those. After installing all of the brackets, I was left with this. Holy mess, batman. 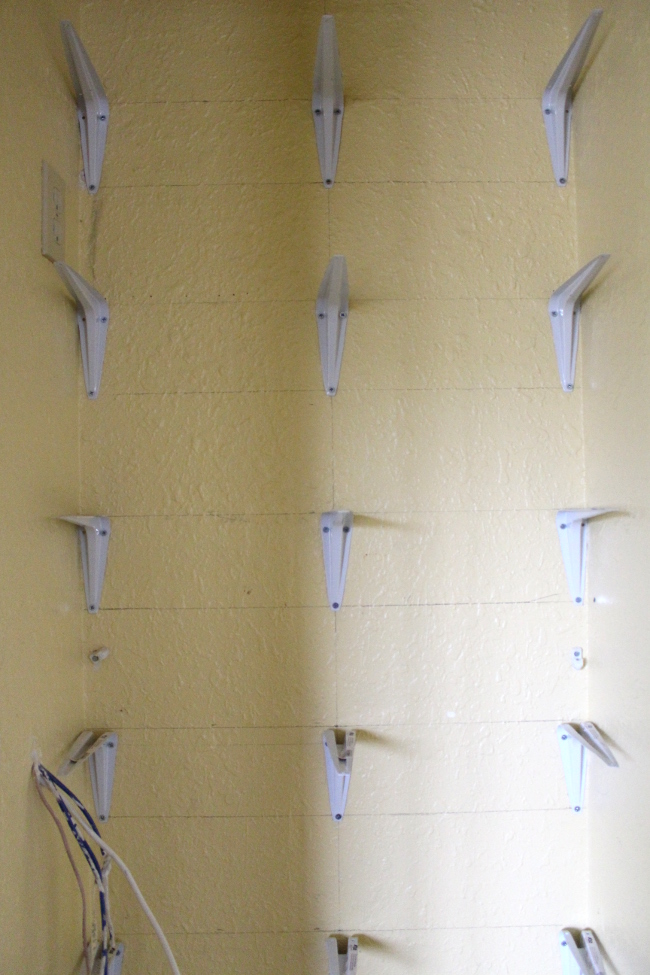 Nothing a magic eraser can’t fix.

Once I was done installing the brackets, we found out our rental house has been sold, and we have a bit over a month until move out day. I considered taking all the brackets down and patching the holes, but I came to the conclusion that that was silly and irrational. So I finished up and installed the shelves in place. Not too shabby, ay? 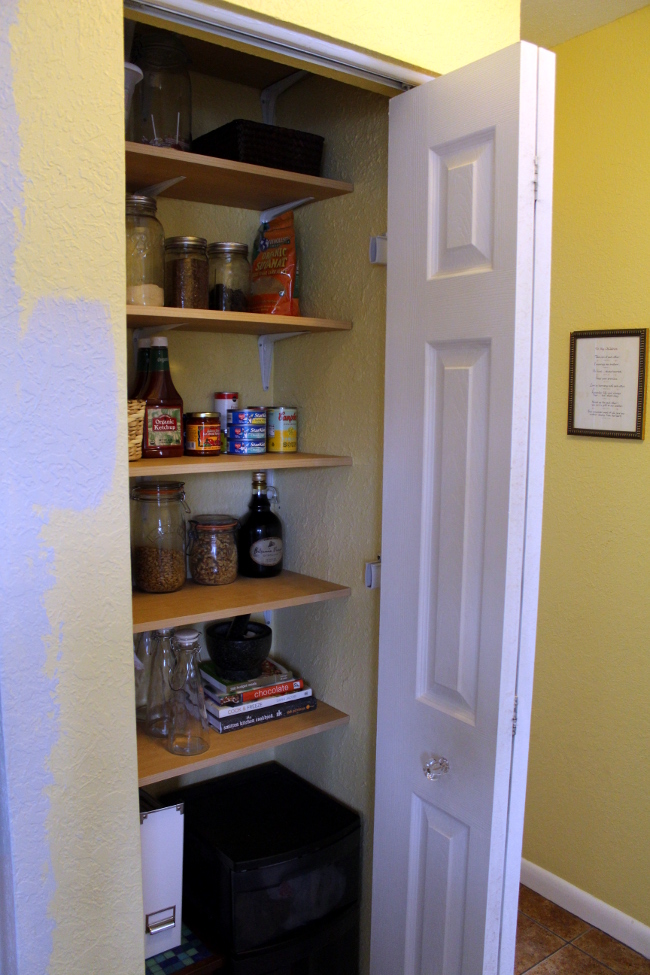 Here’s a rundown of how I organized. 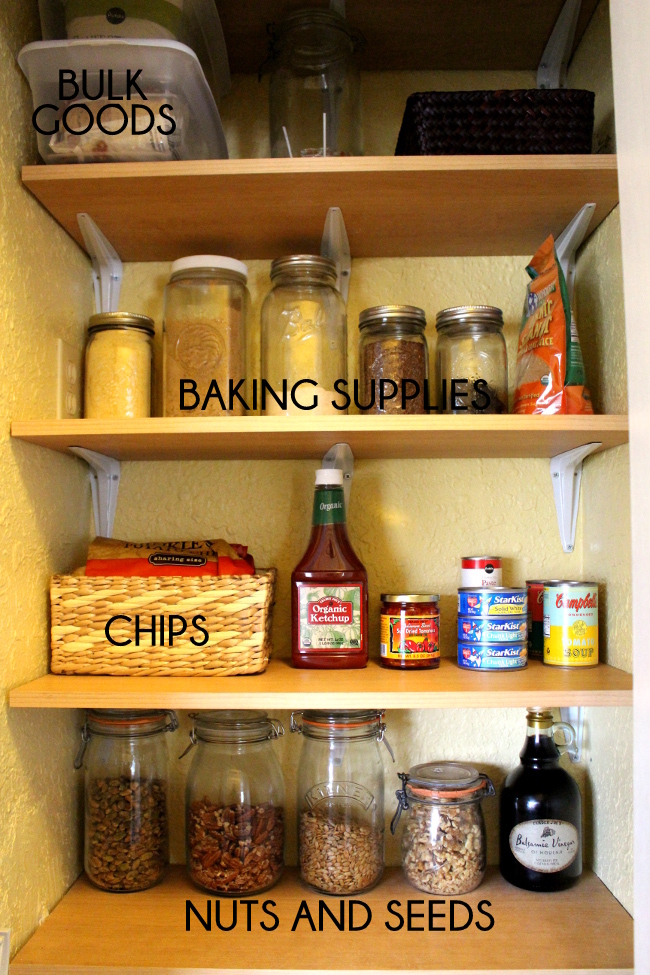 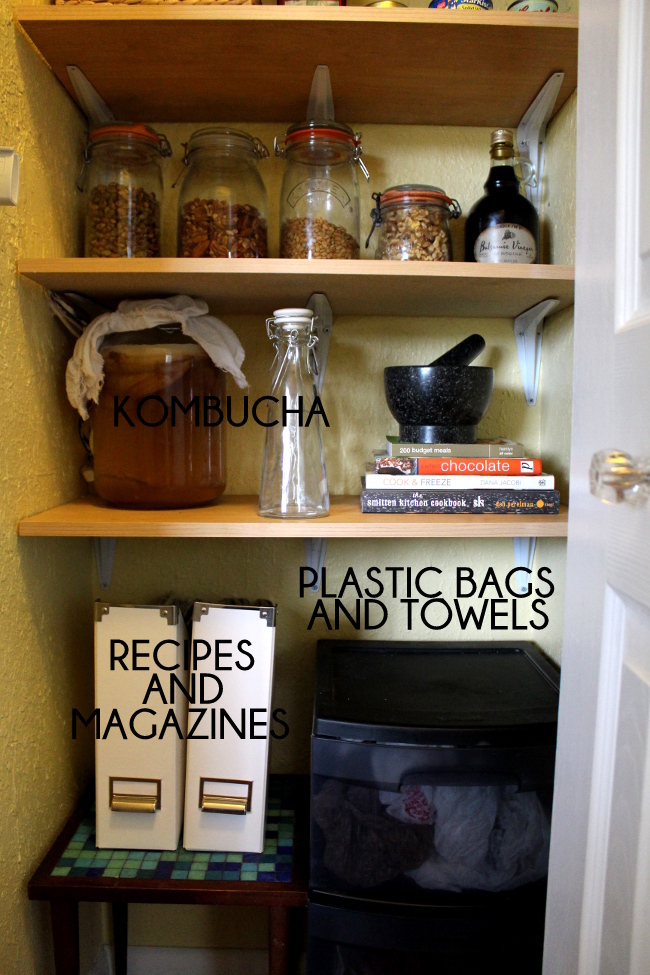 The goal now is to keep it this way. Do you find it hard to keep your kitchen organized?