Let’s talking about plumbing. More specifically, let’s talk about repiping a house. After we confirmed that the mysteriously leak we discovered on Thanksgiving was under our home’s foundation, we knew the only option would be to reroute all of the plumbing to run through the attic and walls. In some cases, it is possible and feasible to dig through the foundation, repair the leak, fill in the hole, then replace the flooring. However, the flooring in our home is terrazzo which isn’t cheap or easy to repair. 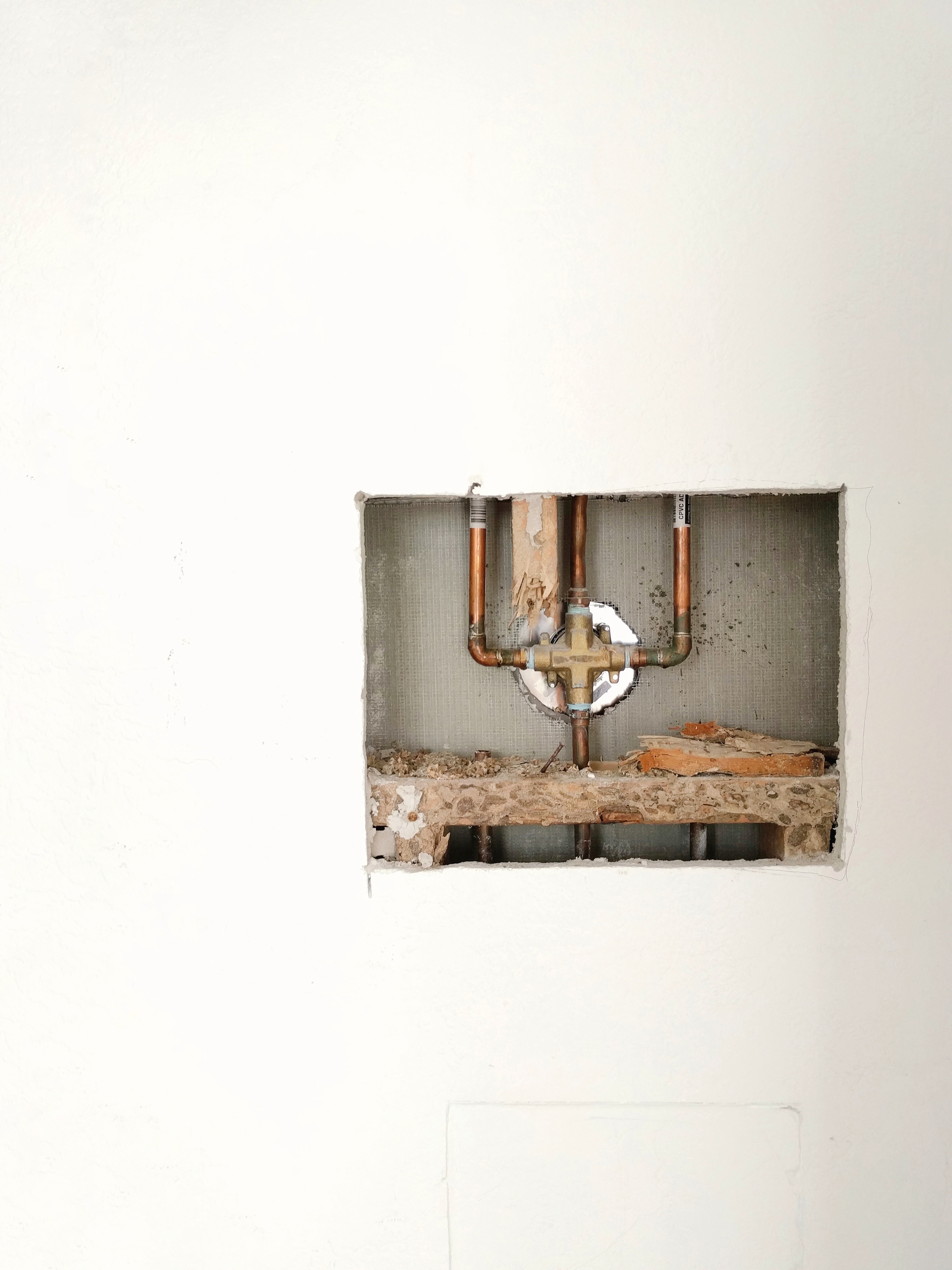 We hired a leak detection company to come pinpoint the leak, mainly for the sake of filing a claim with our homeowners insurance. The leak detector used a sonar listening device to discover two leaks under the slab, one under the sink in our hall bathroom and another next to the bathtub in the same room. This indicated that our pipes were in such rough shape that there was a high chance other leaks would pop up.

After some consideration, we decided to file a claim with our homeowners insurance. Within the week, two adjusters came out to assess the “damage”, even though there wasn’t any visual damage – yet (more on that later). I showed them the paperwork from the leak detection company and some quotes I received from different plumbers, including the option to either patch the leaks or repipe. After concluding that a repiping would be the most cost effective, the adjusters spent time assessing the property and estimating the cost of repairs to the damage that would be caused from the repiping. A little note on homeowners insurance, most companies would pay for the actual repair of the pipes, but will cover the plumbers labor and the damage caused by the repairs. In this case, that meant the plaster walls and ceilings and any texture, primer, and paint it would take to cover the patches. 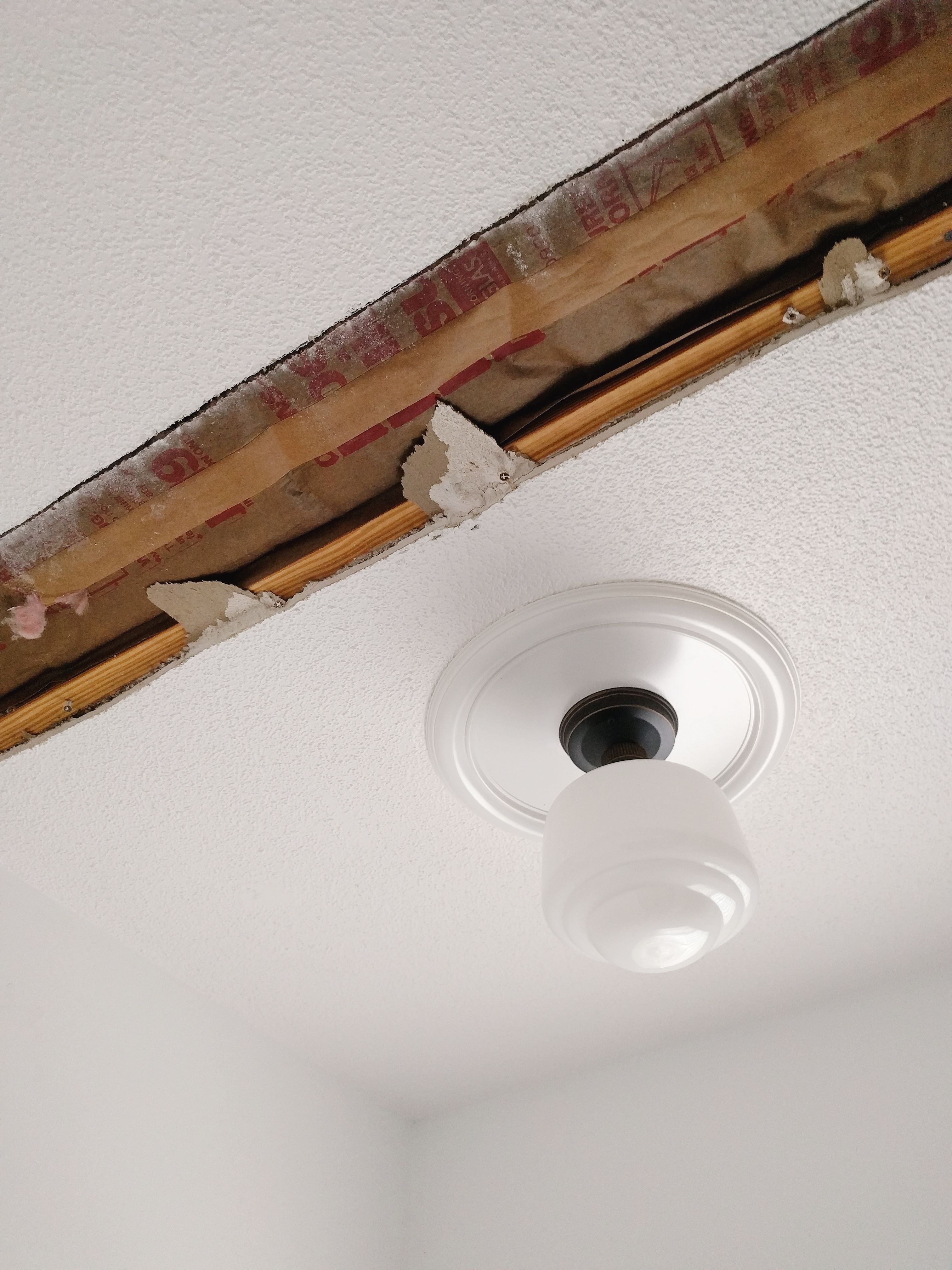 Once the insurance adjusters left, we coordinated with the plumbers for them to come out at their earliest convenience. The next night, we turned our water on for our daily twenty minutes to wash dishes, flush toilets, and shower. My daughter was walking to her bedroom when she discovered a giant puddle that formed in our house, covering a large portion of our kitchen, the hall, and the dining room. The leak came up through the slab in the corner of our kitchen, which is on the other side of our hall bathroom (where both of the leaks were located). We worked quickly to sop up the water with every towel we own and a shop vac and were reminded of how we had previously been through a similar situation. Afterwards, I texted the plumber to see if they could come out any earlier than we initially planned since we were now completely without any running water.

A team of six plumbers arrived two days later at 8:30 in the morning and worked through until 8:30 that night. It was a mad house, one the children thoroughly enjoyed. The way our property is laid out, the plumbers decided to reroute our main supply line from the meter to the side of the house, rather than from the front of the house. In order to do so, they dug a trench in our front yard, ran a copper pipe along the side of the home and drilled into the exterior wall to feed it into the attic. From there they ran cpvc pipes through the attic and down the walls to the access points. They cut out squares in multiple places on the wall to hook up the connections. Our living room is an addition to the original house, so in order to access the beige bathroom and laundry room they drilled holes from our bedroom closet through the original cement exterior wall to the other side. Since dust is a given when cutting through walls, especially plaster walls, I tried my best to ignore the mess and held on to the hope of running water that was on the horizon. 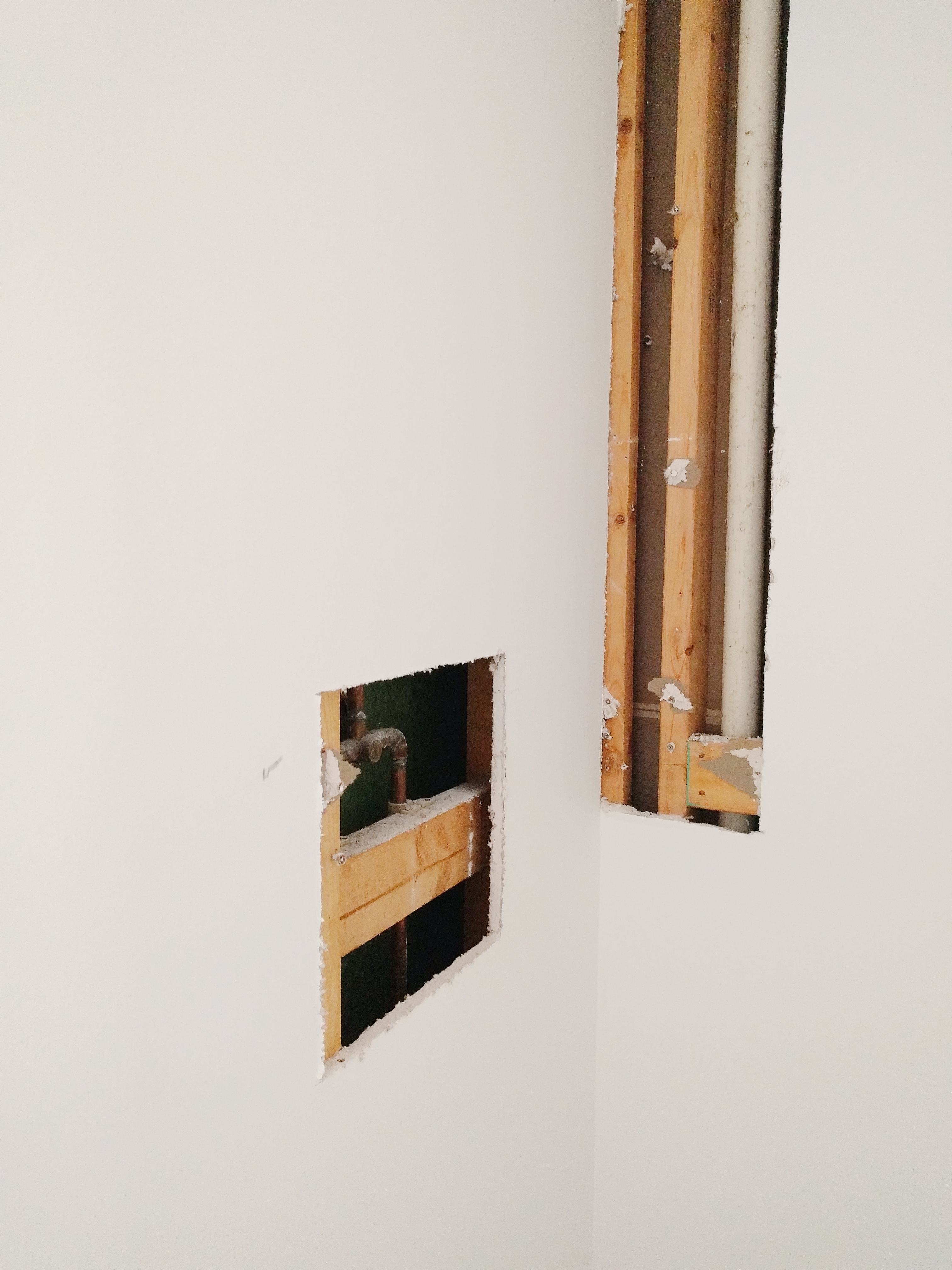 As it stands now, our home is still sporting multiple holes in the walls and ceiling (one of which revealed old termite damage), pipes are exposed in our master closet, and our kitchen cabinets are damaged from the water that came through the slab. The beige bathroom may be the worst off, with a long strip of the ceiling missing and multiple strips in the walls behind the shower (exactly where I planned to add shelves). We are holding off on patching the walls until we decide if we want to go ahead and finish demolishing to jump start our remodeling plans for the bathroom and kitchen. Thankfully (seriously, praise God!) the damaged cabinets fell under damage covered by insurance but since a kitchen is so much more than cabinets, it doesn’t necessarily mean a kitchen renovation is right around the corner. Of course, we will also be waiting for my foot to heal before we begin any type of remodeling project. On the positive side I will have plenty of time to consider important layout and design decisions, there’s not much more an indecisive person can ask for, right?